Just after the Assembly approved the technological park project, San Jose Mayor has shown some pictures of the next theme park to be constructed next to Calvo cemetery.

This idea has been supported by Mayor Johnny Araya even before running for the presidency. He is looking to create a “technology theme corridor” between La Sabana and Gonzalez Square in parallel with the train station.

Sixteen thousand meters square of the cemetery will become a patrimony of the State. This will allow the San Jose city hall to change some plans and construct the park. 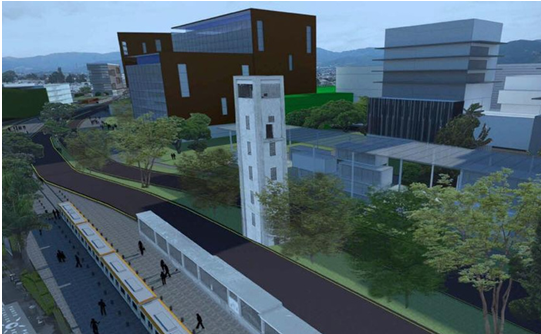 According to Araya, the project will create a technological cluster in the heart of the capital city. Some fees will be charged to businesspeople seeking to install their companies in these spaces.

“We are planning to host the Central American Olympic Games one day. The only way to get this project started was through the approval of a new law and with the aid of the National Assembly”. – Araya said.

Some congressmen like the biochemist Freddy Pachecon Leon has opposed to the approval of this project considering it as a “macabre legislative blow.”

According to Pacheco, there are 1000 people buried in the cemetery. Most of them were poor people.

He also pointed out that within some years, the majority of the poor people living in the capital city won’t have a space in the cemetery to bury their beloved ones.

For the environmentalist, the State doesn’t count on enough resources to exhume so many bodies prior to the construction of the technological cluster.

Pacheco won’t give up and said that he would ask President Solis to repeal the new law.

Nine lawmakers are against this proposal; one of them is Ligia Fallas who belongs to the Frente Amplio Political Party.

Corcovado: The Best National Park In The World