Officially the Lima 2019 Pan American Games concluded with good news for the Costa Rican delegation who earned 5 medals; 1 gold, and 4 bronze. The “Tica” Andrea Carolina Vargas, was awarded the gold medal in the 100 meters hurdles with a time of 12.82 beating her United States opponents Chanel Brissett, with a time of 12.99 and the Jamaican Krystina Simmonds with  13.01. 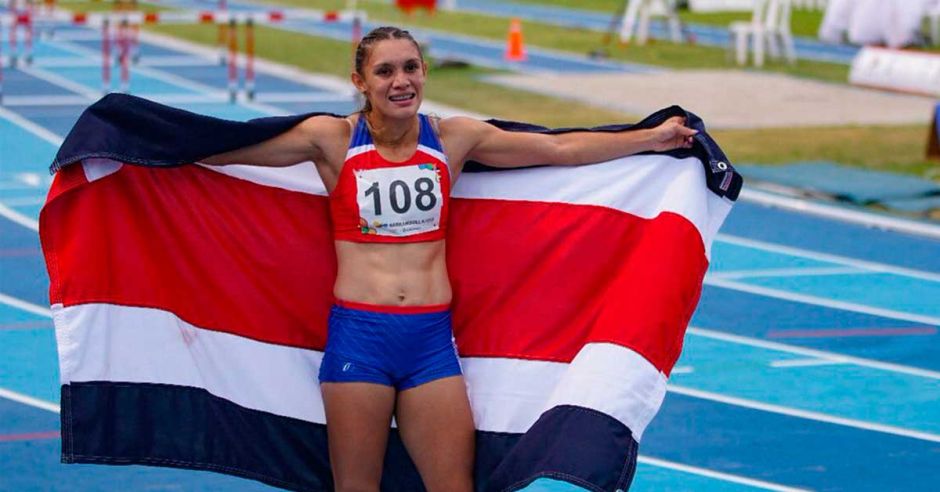 Andrea with her emblematic performance managed to establish a new national and Central American record. With tears of emotion in her eyes after the race, she ran to the arms of her coach and mother Dixiana Mena to celebrate together this important achievement of her sports career. It is important to highlight that this athlete has become the first Costa Rican woman to proclaim herself a champion of athletics in Pan American games.

“I dreamed it, and managed to do the best I could”, these were the words Andrea gave us after being crowned Pan American champion. She also told us: “I know that I still have to continue improving, but I am very happy. It is the highest sports award that can be reached in America`s”.

She offered us her impressions about the race, stating, “I knew I wasn`t going to be upfront in the first hurdle because my start is not so explosive, but I then I increased my speed and reach the girl from the United States”.

Try to do your best and focus 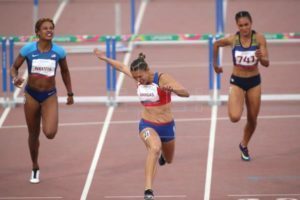 “When I won this medal, all the sacrifices I made and all the training came to mind,” points out Vargas. Effort, Discipline, and Dedication are what Dixina Mena, Andrea`s trainer and Mom told us of what this triumph means for Andrea. “This gold symbolizes all the work, effort, discipline and dedication with which we prepared this season,  we knew it would be hard to obtain the victory here in the Pan America Games, because in our continent the competition in our field is very intense and that is why we had been preparing for the event in Lima since November”. Mena added, “This is not her peak time of the year, both she and I know that she can aim for more and that from now on we will dose the training process because we must replenish energy ”. “In the same way, I announce that Andrea will go to the United States and continue there her training after the Doha World Cup, Qatar, that will take place in September of this year”.

Coach Mena described to us the type of methods used to obtain this triumph of Andrea, one of them is the use of videos, in which she records her workouts, and this way visualize her mistakes and thus be able to perfect her technique when jumping the hurdles.

Coaches specialized in the field point out to us that the technique used by this athlete is almost perfect, due to the way she passes the hurdles, not wasting time doubting when jumping.

The beginnings of Andrea Vargas in Track and Field. 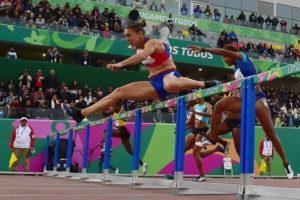 Dixie tells us, “Andrea from a young age was a girl who did not like television or playing with Barbíe dolls, she just wanted a pet dog and she took it out for walks in the street.”  “Andrea was winning school competitions and at age 7 she had already qualified for the Central American track and field tournaments. But she could not compete until she was 10 years old”, she said.

Her mother, seeing her daughter’s potential in this discipline, immersed herself completely in the wonderful world of athletics to be able to accompany her daughter to all the international meets, eventually becoming her coach.

Andrea Vargas told us of training with her mother since she was 15 years old and that her mother “is the one who drives and motivates her to move forward in each competition.” More than a mother and daughter relationship, it is a synergy that has reaped success over time.

Andrea is currently classified for the highest sporting which is the Tokyo 2020 Olympics and in which she is expected to achieve her best performance and give the desired medal to her country Costa Rica.