In my last column, I talked about an experience of agnosia (the loss of the ability to recognize people and objects) that occurred during an especially intense meditation along the Merced River. In this piece, I’d like to convey another life-altering experience at the same place.

I thought of this experience at the end of President Obama’s State of the Union Address Tuesday night, when he dutifully genuflected before ‘our brave troops,’ and tooted his own horn about executing the pathetic head of al-Qaeda, Osama bin Laden.

Back then, I’d found a rough balance between finishing my college degree as an over-30 returning student, working part time, and running track for one grueling but successful season. Once a week I visited the riverine spot outside of the Central California semi-college town for some essential contact with nature.

For years, through my 20’s and early 30’s, I’d been nearly obsessed with the question: Given that man evolved in nature along the same lines as all other species, how is it that man has come to be such a hugely destructive factor in and of nature? On this particular day, I got my answer.

The universe guards its secrets jealously, and sometimes only releases them violently. For 15 years, occupying much of my youth, I had persistently asked ‘the question,’ and investigated, outside of academia, every pertinent thinker in Western or Eastern philosophy that might provide an answer.

When I realized, in my late 20’s, that no philosopher, West or East, had an adequate explanation for my question, I focused on finding out for myself. That day, at a gut-shaking rather than intellectual level, I had an explosive insight.

At the time, Castle Air Force Base was still operational. Ronald Reagan was in the Oval Office, the Cold War was at its height, and B-52’s carried nuclear weapons on their training runs.

But until that day I had never seen, or heard, one of the mammoth bombers over my meditation spot. As fate would have it, I’d had an hour alone, and awakened a deeply meditative (quiet and empty) state before I heard a low rumble in the distance, less than 50 miles away.

I recall instantly knowing what it was: One of the B-52’s had taken off and was heading in my direction. I knew it would 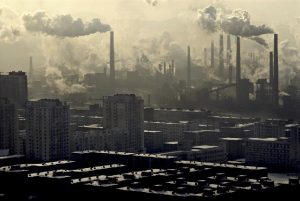 fly, for the first time, directly overhead, and that I was in for it.

Within a minute the roar from the engines of the monstrous plane was upon me. In that state of extreme sensitivity, I became like an animal, with flight or fight reactions fully activated.

The first reaction to fear is always to flee. Humorously, I recall running back toward the car, and realizing I wouldn’t make it in time. But then something came over me—a furious defiance, producing a strong urge to stand my ground and face the darkness.

So there I stood as the huge thing flew directly over my head, seemingly in slow motion, so close that I could read the writing on its underwings. Curiously, my long-standing question rose to the surface: Is this man?

Common knowledge about nuclear-armed superpowers, able to reduce the earth to radioactive ash in a few hours, merged, in one indescribably intense moment, with my question, as the massive engines shook my guts and pounded my feet on the ground.

Here was man, I witnessed, in all his destructive glory. Here was my answer, I realized, if I could face it.

At a level as deep as my quivering intestines and vibrating heart, I saw. The evolution of so-called higher thought ineluctably generates more and more fragmentation at every level until a sufficient number of people have a core-level, species-wide insight into it. 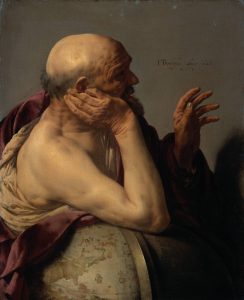 Man separates, until he splits the atom. Man divides, until he tampers with life itself. Man assaults nature, until he cuts the ground out from under himself. Man stands apart, until he generates evil.

I was literally staring into the belly of the beast, and saw with all my being that it was myself. Strangely, I felt at peace. I even felt, to use a faddish and misused word of late, compassion for humanity, of which I am inextricably part.

Consciousness is not thought. We are becoming less conscious in our inattention to thought/emotion, as our computers are becoming more calculating, speedy, and networked. Without self-knowing and insight into the mind of man within ourselves, runaway psychological division and technological fragmentation will continue.

The question I’ve held since that day is: Is man’s self-made crisis a self-made crucible giving birth to true consciousness?

Neuroscientists are making discoveries that produce knowledge of how thought-based consciousness operates in the brain. But they offer no insight into how to transcend the gift that has become the planet’s curse.

The problem isn’t our evolutionary intellectual capability; it’s our psychological and emotional negligence. Humans aren’t learning because we believe that learning is the accumulation of knowledge and experience.

For thousands of years, true teachers have said the same thing: Look within, and free yourself.

With the aim of raising awareness against animal abuse and celebrating our best furry friends, the Doggo Fest was held on May 14th and 15th.
TCRN