The International Workers’ Day is celebrated every May 1st around the world, to commemorate the vindication of the labor rights of men and women alike. This day serves as a reason to denounce abuses, request reforms and seek recognition of social and employment benefits.This day commemorates the historic struggle of working people throughout the world and is recognized in every country except the United States, Canada, and South Africa. This despite the fact that the holiday began in the 1880s in the United States, with the fight for an eight hour work day.

Initially, this date was taken as the ideal opportunity to reflect on the working conditions of salaried workers and to remember those who lost their lives fighting for this cause. Over the years, and from the Socialist Workers Congress of the Second International held in Paris in 1889, the date began to be used to make labor social demands for the working class. Since then, May Day can be considered a day of reflection but also of action. 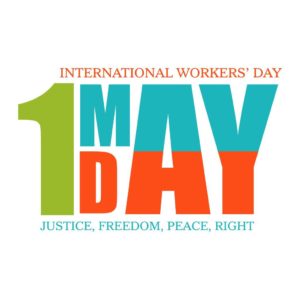 Origins of the workers day

The origins of Labor Day date back to the 19th century. With the arrival of the Industrial Revolution and mass production, the exploitation of millions of people in factories around the world caused discontent and a feeling of injustice due to the fact that working hours were exhausting and wages were minimal. This began to generate social movements that were organized to reveal themselves before the economic model that was oppressing them.

On May 1 was marked internationally as Labor Day in honor of American strikers later known as “Martyrs of Chicago”, who participated in the paralysis of thousands of factories during the protests of 1886, in several cities of the United States, which demanded that the workday will be adapted to 8 hours a day. The heart of the movement was in Chicago, These demonstrations had violent consequences, leaving deadly victims both in the attack on Haymarket Square (May 4, 1886) and a year later, on November 11, 1887, with the execution by hanging of four socialist leaders linked to the protests: Georg Engel, Adolf Fischer, Albert Parsons and August Spies.

That trial is going to have a lot of publicity because, after the Haymarket events, a significant number of businessmen decide to grant their 8 hours of work. That is, finally the general strike and the paralysis of Chicago and other cities around this issue had achieved, at a very high cost, 8 hours. This does not mean that work was done everywhere 8 hours, it was not widespread but the truth is that the claim of eight hours will be the only issue that will unite all the workers of the world, including different political ideologies.

In Costa Rica, the celebrations of May 1 beginning in 1913. The initiative comes from the General Confederation of Workers and the Germinal Social Studies Center, which brought together intellectuals and workers. the Center for Germinal Studies always had a very fraternal relationship with workers and their different organizations

Since the middle of April, at the headquarters of the Germinal Studies Center, delegates of the different trade union organizations met in the preparations for this celebration, where all the workers residing in the country were invited, without distinction of race, nationality, religious beliefs, offices, political opinions, to commemorate May 1. It was intended to turn this date into a protest against all kinds of injustices to which all the workers of the world were subjected, in a march of solidarity, recalling the events of Chicago in 1886.

On May 1, 1913, in San José, at 8:00 in the morning the events began with a parade to La Sabana, with a large mobilization of people in addition to various sporting, cultural events, and speeches by leaders of the workers’ movement and intellectuals. From this date, May first has become one of the days when Costa Rica shines, where the streets are filled with workers, the avenues are decorated with multicolored parades, the Ticos workers are filled with optimism for the achievement of social hopes for themselves and their families. It is a holiday where the workers do not work, share their experiences and enjoy the benefits achieved over the years. Another of the particularities of the celebration of international workers day is that is one of the Costa Rican holidays where you get many tourists, journalists, visitors from many parts of the world to share experiences and to live the moments of joy of the tico people.