Foreign-nationals who stay in Costa Rica longer than authorized by the General Directorate of Immigration must pay US$ 100 for each expired month of irregular stay. If they do not cancel the fine, they will be banned from entering for a period equal to 3 times their stay without permission. 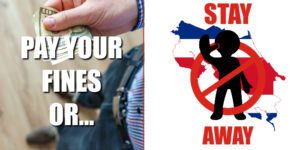 This was arranged in an executive decree, published last Thursday in the official gazette (La Gaceta Oficial), which postpones for 12 months the collection of the economic sanction established in Article 33 of the General Migration and Foreigners Law. According to Migration, this wording would result in sanctions being imposed not only on persons entering the country as non-residents but also on foreigners who hold a migratory category of temporary residence and special category and who, at the time of leaving the country have their Immigration Identity Document for Foreigners (DIMEX) expired.

However, the application of this sanction has been delayed due to technical aspects and problems in the same law. The Directorate of Migration admitted in a statement to have requested the Presidency of the Republic to postpone the collection of the fine since “the current wording of the article includes the payment to Temporary Residents and Special Categories, which is not fair, and prior to making the adjustments to the text “.

“The Directorate of Migration has recognized at all times that proceeding with this collection was not convenient, without first making an adjustment to the text, which is why it has been extended so as not to affect other categories that should not be within this sanction”, said Migration’s head, Gisela Yockchen.

The sanction for irregular stay may be canceled through bank agencies and Puntos Tucán of the Banco de Costa Rica throughout all the country, as well as on the website of the General Directorate of Migration and Immigration, which will be enabled for online cancellation of the fine. Also, in branches of the Costa Rican Postal Service in La Cruz, Liberia, Paso Canoes and Alajuela.

A fine of US$ 100 is applied for each month expired that the person remained in the country irregularly. The amount of the fine is retroactive to March 1st, 2010, the date on which the authorized period of permanence came into force.

If the person cannot, or does not want to cancel the fine, at the time of his departure, the Immigration officer will impose an entry impediment for 3 times; the time the person stayed in the country irregularly. If the person stayed 1 month after the allowed period of stay, he/she will be imposed a 3-month bang and so on, in which he/she will not be able to enter Costa Rica through an immigration control post. The Immigration Officer will give the foreigner a resolution slip where the measure is registered, and the impediment will enter the automated system so that all the immigration control posts have knowledge of it in real time.

The Costa Rica News is Here for Entrepreneurs; Difficult Times are Overcome with Solidarity: “Yo Soy Costa Rica”