Costa Rican psychologist and communication student, tells us about her life and part of it, her perseverance and dedication that have led her to work for the Netflix platform...

There are committed, disciplined people, focused on contributing through various areas, many of them inspire and motivate us to go in the right direction, being constant to achieve our dreams, our convictions, and an example of this type of person is the Costa Rican Jimena Caballero.

A few days ago, we had a pleasant conversation with the psychologist Jimena, who told us about her life, her professional careers, her experience in the field of mental health and advice for the Netflix platform.

With Costa Rican and Mexican ancestry 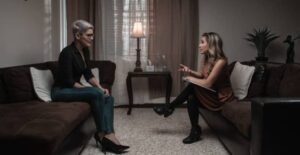 Jimena Caballero, told us part of her roots and that is that she comes from a mother born in Costa Rica, a working woman and her father, born and living in Mexico, for her “loving and attentive”.

It is worth noting that her paternal grandfather was Costa Rican, the last general of the war exiled with Calderón, he said that the best thing that happened to him in life was exile, since he met Jimena’s grandmother and fell in love.

In other words, the successful young woman has the spirit of fighters, perhaps for this reason she considers that she has that adventurous and tenacious spirit, which she owes to her family. “I grew up in the Cuba neighborhood, south of San José, when we were teenagers we lived in San Francisco de Dos Ríos, I was a very bold, adventurous girl, I liked to go out,” Caraballo told us.

Did you only study psychology or are you a professional in other areas?

Jimena Caballero, has different careers, she was at the Castella Conservatory, which is a School of Arts, there she graduated in theater and literature, after that she studied theater for a long time at the Giratablas, she has a lot of training in this art, so much so that she directed plays; studied psychology and got her bachelor’s degree, then studied in a German Progressive Politics program and worked as a political consultant, then studied and got a Masters in Business Administration and is currently studying for a Masters in Communication.

Regarding her work, she has pursued careers in very interesting areas: Her first job was in prisons (with men deprived of liberty, then with women), working with the Transvida Association, with trans women who are in the sex trade; She was working with the Inamu, doing research in the Caribbean region with women from Talamanca, Afro-descendants and indigenous people from that area, in his opinion “it was a super nice experience.”

She worked at the Presidential House as an advisor to the Vice President of the Republic during the period of Mrs. Ana Elena Chacón, after that she began working with Ret Internacional, which is an Association of Refugees, there doing the work of providing therapeutic care to refugees, also having a children’s group of refugee children with a playful methodology to implement with them. Parallel to this having a private practice with her psychological therapies, “the practice grew so much that it is currently what I dedicate myself to, I resigned from the work of the Association with refugees and now I am starting a clinic,”.

Right now, due to her Communication studies, she has been in charge of content for Televisa, Univision, Telemundo and also as a documentary consultant for Netflix.

Jimena can hardly stay calm, doing just one thing or supporting herself without contributing anything to others, which is why she contacted the people at Netflix, “Before the pandemic I was experiencing traveling around the world a lot, opening my mind, when the pandemic arrived I felt a lot of frustration when I felt that I had to stay locked up at home, I have a free soul. that when I realized it, it was appearing in the national media, to negotiate with channel 6, channel 13, channel UCR, channel 8, I said to myself -well, if I can with television spaces in Costa Rica, what happens with the international ones?-, From there I began to manage my public relations with producers, directors with people who work for international platforms”.

Jimena was constant and as a result of that, she already had a friendship developed through the various internet platforms, including Netflix, she spoke to them about her resume, her experience and my desire to influence again through art, social messages and so on.

The opportunity began where they told her that her work seemed interesting to them, what she had done and the question arose, if she could help them in a consultancy for a documentary, then another one came, she received a course in Mexico from the Netflix platform, to be able to present their own project and which they will start working on in the coming months, depending on their time availability. Today she stays in contact with Netflix producers.

It is noteworthy that the course she attended in Mexico, allowed her to learn about how to develop proposals in the Netflix audiovisual market, which led to incredible contacts of people who want to impact the world in a positive way.

Netflix documentaries are focused on mental health, among other social issues, such as migration, due to his experience with international organizations, as well as as activism for human rights and politics.

Today the young psychologist considers that there are no limitations, since all of them are mental; “People do not choose where they come from, but they can choose where they want to go and it is an exercise in projection, mentality and self-confidence, creating the potential routes that mobilize us to the experiences that we want to have, we just need to feel worthy and persevere with a lot of discipline to achieve them”.

Caballero added that one of the learnings that life has allowed her to have through the social groups with which she worked, is to understand, to be nurtured by the teachings of others and their realities. “I have understood the importance, the value of the human dignity of each person, not judging their stories, the importance of accompanying the security that we human beings have to develop freely, because all human beings experience the same emotions and we all deserve to be happy”.

Without a doubt, Jimena Caballero is Tico pride, an example that if dreams can be fulfilled with effort and perseverance, that one should not give up, just take breaks to reflect and move forward with greater effort. From TCRN, we wish her much more success.