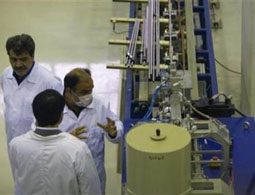 President Mahmoud Ahmadinejad’s announcement raised the stakes in Iran’s dispute with the West, but he said talks were still possible on a nuclear swap offer by world powers designed to allay fears the Islamic Republic is making an atomic bomb.

U.S. Defense Secretary Robert Gates said the response by Iran, a major oil exporter which says its nuclear program is to make electricity and not bombs, was very disappointing.

“If the international community will stand together and bring pressure to bear on the Iranian government, I believe there is still time for sanctions and pressure to work,” he told a news conference during a visit to Italy.

There was international consensus to avoid “more hardship than is absolutely necessary” on the Iranian people, said Gates.

“It may be that the sanctions screw needs to be or can be turned here and there. We need to consider very carefully what impact our options could have,” German Defense Minister Karl-Theodor zu Guttenberg said, adding it should be made clear to Iran that “patience is at an end.”

Iran has already had three sets of sanctions imposed on it. China, which has veto power in the U.N. Security Council, has made clear it wants big powers to keep talking to Iran rather than impose new measures.

The United States, China and other major powers have proposed that Iran send most of its low-enriched uranium abroad in return for nuclear fuel refined to a level of 20 percent, for use in the Tehran reactor producing medical isotopes.

But Ahmadinejad has now told Iran’s Atomic Energy Organization to start work on producing its own higher-grade nuclear reactor fuel for the medical research reactor.

“We had told them (the West) to come and have a swap, although we could produce the 20 percent enriched fuel ourselves,” Ahmadinejad said in a televised speech at a ceremony marking Iran’s latest laser technology achievements.

“We gave them two-to-three months’ time for such a deal. They started a new game and now I (ask) Dr Salehi to start work on the production of 20 percent fuel using centrifuges,” he said, referring to atomic energy chief Ali Akbar Salehi.

But Salehi said his organization was only put on standby.

“The president ordered the Atomic Energy Organization to be on standby, so that if the talks on nuclear fuel exchange does not reach an agreement, then the organization starts production, because this needs some preparations,” he told IRNA news agency.

State broadcaster IRIB quoted Ahmadinejad as saying that if world powers agreed to swap uranium without conditions, “then we would cooperate as well. We are ready for negotiations.”

Iran enriches uranium to a level of about 3.5 percent. Refined uranium can have both civilian and military uses, with more than 80 percent enrichment needed for an atom bomb.

Gareth Evans, co-Chair of the International Commission on Nuclear Non-Proliferation and Disarmament, told Reuters he expected Iran had the ability to go to 20 per cent.

“I don’t think there’s any doubt really that they’d be able to manage that (20 pct). There’d be some doubt I suppose about the time it would take,” Evans said.

Gary Smith, executive director of the American Academy think-tank in Berlin, said Ahmadinejad’s statement was not a surprise. “It increases the likelihood of stronger sanctions but the Chinese are still the big question mark,” he said.

Ahmadinejad also said Iran had the capability to enrich uranium using laser technology, but IRNA said there was no plan to do this as the country already had enrichment centrifuges.

On Tuesday, the president had appeared for the first time to drop long-standing conditions Tehran had set for accepting the U.N.-brokered fuel proposal, saying Iran was ready to send its enriched uranium abroad in exchange for nuclear fuel.

Some analysts interpret the mixed messages from Tehran as a sign of splits linked to political turmoil after Iran’s disputed June presidential election. Others see it as a delaying tactic.

Iran said on Sunday it had arrested seven people accused of stoking unrest after the election, including some who it said were employed by the U.S. Central Intelligence Agency.

The arrests were reported by IRNA before possible new anti-government protests on February 11, when Iran marks the 31st anniversary of the 1979 Islamic revolution that toppled the U.S.-backed shah.

Iran’s Foreign Minister Manouchehr Mottaki said on Friday he saw good prospects for a nuclear accord, but restated two conditions — that any fuel exchange must be simultaneous and that Iran would determine quantities involved.

He said on Saturday he had “a very good meeting” with the head of the U.N. nuclear agency on the fuel swap plan.

Hybrid working has helped improve employee well-being, work-life balance, and performance around the world, according to a new global...
Health