Hanna Gabriels: An Athlete with Strong Gloves and a Kind Heart

In life we recieve hard blows, but there is nothing we cannot overcome if we are with God. Today an athlete and mother, tells us her story, how she has been able to move forward despite having suffered sexual abuse...

At The Costa Rica News, we give continuity to conversations with personalities from Costa Rica, who have placed the country high in distinction. Hanna Gabriels, athlete, mother and above all a woman focused on what she wants, told us her story, her triumphs and sorrows, that despite having them, she has managed to move forward in life with strength.

She is a native of Alajuela, for Gabriels, her parents were always a great guide, making efforts so that their children could get ahead in studies and sports, one special thing is that they always let Hanna know that she was capable of anything, with effort, sacrifices, that allowed to achieve her goals up to date.

Since her childhood where she was outgoing, risky, full of challenges, she dreamed of being an Olympic champion in athletics, and tells us that this sport was her refuge, because at the beginning of her sports career she suffered sexual abuse from a person she trusted a lot and that trauma haunted her a lot. Sport became a safe place for Hanna, despite everything.

Do you have any professional career, in which areas have you worked? 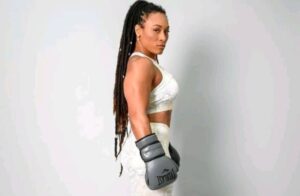 She is a university student of Physical Therapy at the University of Santa Paula, and has not finished her degree due to lack of time, due to responsibilities, she also studies Aesthetics, and is a certified Empowerment and Self-Defense instructor. Working as a boxing instructor for some time and as a personal trainer.

What do you like to do apart from sports? 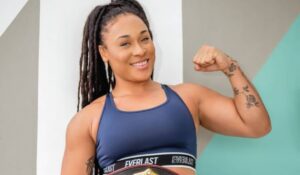 Hanna Gabriels, beyond practicing sports like boxing, likes to spend time with God, likes to meditate and pray, work with the land, planting vegetables, enjoying family time. “As long as I continue to do what I like in boxing but also working with people, I will feel fulfilled. Today I believe that the inspiration comes from doing what God wants, that we go through the world emitting light, not taking things so personally and always doing good.

Hanna Gabriels through the boxing gloves

From the ages of 5 to 17, Hannah worked in athletics, becoming the National Champion of Costa Rica. From the age of 19 to the present, she practices boxing. In the sport of gloves, Gabriels had the first and only amateur fight in which she defeated the National Champion of Costa Rica and took her place; later she became a professional boxer, first CR world champion in 2009 (Welterweight Champion); in 2010 she became the country’s Super Welter World Champion.

In 2013 she lost her title and after that she became pregnant and had her daughter; in 2016 she became the first unified World Champion with the titles of the World Boxing Association and the World Boxing Organization in super welterweight, she was the champion until 2018, when she fought against Claressa Shields, that is right now the so-called number 1 in the world,” declared the best fight of the year, seen by more than 500,000 people”.

Right now, the athlete wants to achieve many things with boxing, she has 3 years left as an active athlete, “I focus on training, achieving more goals, preparing myself for when I retire, I have a project in mind: the creation of the first Center for the Prevention of Violence in Costa Rica, where we will provide tools to the general population in this matter and will have free access.”

I asked Hanna if she feels admiration for someone from Costa Rica and she replied that many people depending on the area where she works, mostly her sports friends, “when you live as an athlete you know everything you have to do to achieve goals, one of them is Sharon Scott, who was selected for the national athletics team being a very young mother and continued her sports career when her daughter was very young, in search of her dreams. I can mention more, but she is one of my examples”.

Discipline, according to Gabriels, is the result of perseverance, daily habits, approaches and effort, that is something that must always be remembered

Finally, Hanna Gabriels, leaves us a teaching for life, about her strong moments lived, the fact of having suffered sexual abuse as a child, in her adolescence generated confusion, feeling of not deserving good things or feeling valuable, that marked many years of her life, mainly her youth for that was certified as an Empowerment and Self Defense instructor.

“I believe that the Costa Rican system is made for us to be successful in many areas, but not in important areas such as personal, spiritual, when I took the self-defense course I thought that if I had had those tools before, my life would have been less painful, my decisions perhaps painted differently to overcome the traumas I suffered. Things are overcome when one is willing to have a conversation with oneself, honestly and continue with a lot of introspective,” said Gabriels.

Before the end of July, a 4x3 work week would be enabled. This is a change in working hours,...
Money

International Exhibition: “Parenthesis. Stories from Uncertainty” At the Cultural Center of Spain with the Presence of Prominent Costa Rican Artists