Suspended on a river or on an abyss, bridges are the elements that link two banks, which connect two extremes. Being one of the most mythical sites, they are present in all kinds of legends, stories, and folkloric traditions. The “Milky Way” and the “Rainbow” were considered as “Bridges” between the areas of existence. Also at the level of human character is used as a symbol that represents the union of 2 different aspects of being, is the possibility of moving towards a different state of consciousness.

The history of bridges started with the human need to cross small streams and rivers. Until today, the technique has gone from a simple slab to large hanging bridges that measure several kilometers and cross bays. Bridges have become, throughout history, not only a very basic element of a society but also a symbol of their technological capacity. 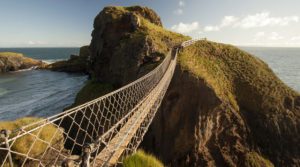 The first bridges were made with simple natural elements, such as a trunk dropped on a stream or stones arranged in a river. These first bridges would be a combination of rocks piled up like pillars supporting the timbers that functioned as boards. It is known that some American tribes used trees and canes to build footbridges that allowed them to save homes in the caverns. With time they knew how to create ropes that allowed the different elements of the bridge to be united. These ropes were also used to create primitive rope bridges tied to the 2 sides that they wanted to cross. In some way, that is how hanging bridges were born.

What are hanging bridges?

A hanging bridge is a bridge whose board, instead of being supported on piles or arches, is held by cables or braced parts from a structure to which they are attached. One of its best-known variants is that it has a catenary formed by numerous steel cables, from which the bridge deck is suspended by vertical braces. 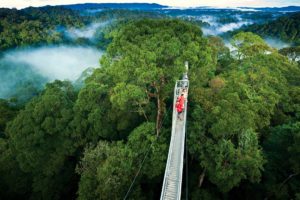 In the Asian, Amerindian, or African civilizations, the hanging bridge was an early traditional means of crossing obstacles, mainly in mountainous regions where the difficulty of traversing deep gorges presented itself. Thus, it is estimated that in the 16th century, at the arrival of the Spaniards, there were more than 200 Inca hanging bridges, angular pieces of the vast network of roads of the Amerindian empire, usually reaching 50 meters in length, probably more, rather more than the European factory arch of the time.

Only the appearance of the metallic structure would allow overcoming that distance without intermediate pillars. If the Incas were the only Amerindian civilization that developed this type of hanging bridges, they already existed in other cultures of the mountainous regions of the world, such as the Himalayas. In ancient China, hanging bridges with steel chains were built in the 3rd century BC. But the usual thing is that those old bridges were composed mostly of lianas and with a wooden board, which allowed the passage of modest loads with a light bridge structure.

In some of the national parks of Costa Rica visitors, in addition to the classic walks through picturesque places, may have access to many impressive attractions, among which are the hanging bridges. This mode of movement allows to fully appreciate the natural splendor of the parks since you can observe birds and wild animals very closely. 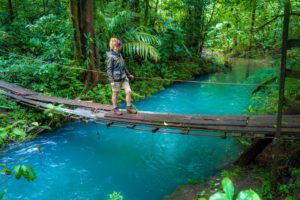 In those sections that were equipped with hanging bridges, not everyone dares to take a walk for them because the height, wind, and length of the bridges are a guaranteed dose of adrenaline and excitement. From these bridges, you can make excellent photos, since they are in the most beautiful areas of the reserves, above the impetuous rivers and waterfalls.

Where to find the most beautiful hanging bridges in Costa Rica

The Hanging Bridges of Selvatura to appreciate the beauty of the Monteverde Forest. Consists of 8 different bridges of various lengths ranging from 50 to 170 meters, and altitudes that range between 12 and 60 meters. Each bridge is 1.5 meters wide making them the widest in the country, they also have a capacity of 60 people per bridge, making them the strongest in Costa Rica. Hanging bridges are suitable for people of all ages and physical conditions. The duration of the tour is usually between 1.5 and 2 hours. 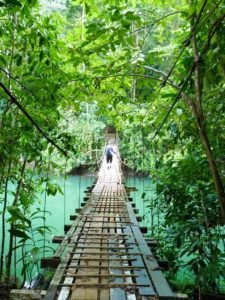 You can also cross a hanging bridge the beautiful celestial river in the Tenorio Volcano National Park. Undoubtedly, one of the great attractions of the Tenorio volcano, and the one that calls many people to venture up to here is the Celeste River, with its formidable waterfall of 20 meters, and it is clear and crystalline waters. You can cross it on a suspension bridge and see one of those classic images of Costa Rica that will not be forgotten. On this landscape, it is said that God himself, after painting the blue sky, cleaned his brush in Blue Lake. This legend serves to give an idea of the beauty and magnificence of this corner that attracts every year people from very different places of the world.