After the end of the Korean War in 1953, in which the Korean peninsula was definitively divided in 2 opposite countries, not only in a geographical sense but also in the ideological sense, their differences as countries have been increasing throughout the years. As a result, the Northern portion of the peninsula became North Korea, ruled by a communist regime by a cruel dynasty of dictators, and its Southern part became South Korea, governed under a democratic pro-capitalist system.

Similarly, in a certain sense, to what the United States experienced during the North-South war in the 19th Century, each Korean counterpart has obtained foreign support either from one or another ideological pole. Up to some extent, there are people who think this duality might be related to the philosophy of the Yin-Yang balance. It is based on the ancient idea that everything surrounding us is formed and influenced by the combination of 2 opposite forces called Yin and Yang. And by the way, this idea is of Chinese origin. Interesting, is it not?

On one hand, since North Korea decided to adopt the communist ideology inherited from the former Soviet Union and China, they have also decided to impose a highly militarized society aiming to develop a controversial nuclear-weapon-program, often criticized by the international media community. This situation has led, many times, to a recurrent confrontation with some countries of the Western hemisphere, especially the United States of America (USA).

On the other hand, South Korea has promoted a free society with democratic values. Due to this fact, the nation has also developed a world-class commerce and industry widely favored by a pro-capitalist system, having the USA and the European Union (EU) as its main commercial partners. As we have suggested before, both Koreas are kind of 2 opposite sides of the same coin –remember the thing about the Yin-Yang balance?

Recently, the traditional North Korean confrontation with the USA has reached one the highest breaking-points in many years. Because of the provocative discourse style of the current leaders of either North Korea and the USA, new tensions have risen between these nations and during the last weeks the whole world has been expectant to a potential risk of a North Korean blitz at the US island of Guam which is situated on the Western Pacific Ocean, with a considerable proximity to the coasts of China, Japan, the Philippines, and, of course, the Korean peninsula. 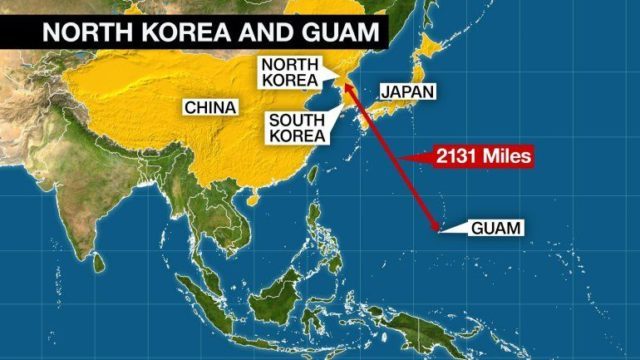 That is why that when the North Korean army loyal to dictator Kim Jong-un announced that they are examining operational plans for attacking Guam after rising tensions with President Donald Trump, it has brought more global attention to the tiny US territory in the Pacific than it has had in decades. Here is a rundown on the island and its strategic importance.

As historical facts, the island of Guam was claimed by Spain in 1565 and became a US territory in 1898 during the Spanish-American War. Japan seized it for about 2 years during the World War II. In 1950, an act of Congress made it an unincorporated organized territory of the United States. It has limited self-government, with a popularly elected governor, small legislature, and non-voting delegate in the US House of Representatives. Residents do not pay US income taxes or vote in the general election for the US president. But, in exchange, its natives are US citizens by birth.

Demographically speaking, the island was first populated about 4,000 years ago by the ancestors of the Chamorros, still the island’s largest ethnic group. Now, about 160,000 people live on Guam. Its capital city is Hagatna, and its largest city is Dededo. Its official languages are English and Chamorro. It has seen various popular movements pushing for greater self-government or even US statehood, most notably a significant but failed effort in the 1980s to make it a commonwealth, on par with Puerto Rico.

But in the light of the recent North Korea’s threat to blitz with inter-continental ballistic missiles (ICBM) at Guam, it is expected that people living in this island might start looking for safer places to be. All of this opens a new range of possibilities either for those who decide to migrate to remote places, especially far away territories which offer similar characteristics to Guam’s environment and for the chosen places themselves.

In this regard, Costa Rica could be a pretty affordable option. Besides being considered a world’s touristic destination and having an astonishing natural attractiveness, this beautiful tropical country also offers budget advantages for migrants coming from other latitudes.

Not to mention again the status of world’s touristic destination that it has, Costa Rica also offers certain areas such as the Central Valley region and the Southern coast, which are ideally suited for migrants who think of establishing their permanent residence in the “ticos” homeland. In this sense, they will find that monthly expenses for a single person often add up to 666 US$ while for a 4-person family could pay 2,459 US$ (excluding rent). In San Jose –the capital city of Costa Rica– rent fares may range between 621 US$ and 1,317 US$ per month. Of course, all this will depend on the city’s neighborhood area in question.

Other reasons for which Guam’s migrants might want to make Costa Rica their permanent residence are briefly highlighted as follows: a) Costa Ricans have high-life expectancy; b) They love and protect their environment; c) They enjoy a slower pace of life in a tropical paradise; d) They eat healthy and fresh foods with very few preservatives; e) Costa Rica is home to an important number of US expatriates.

And to finish, it is worthy to mention the enormous potential of future investment opportunities for eco-tourism including all related infrastructure and specialized services which are, by far, one of the areas with the fastest-growing rate in recent years. Needless to say that this kind of investment will generate a considerable number of employment vacancies, as well as high levels of profit for either social welfare or reinvestment in other strategic areas all over Costa Rica.

Marijuana Can Take Latin America Out of Economic Recession

Together We Are Stronger: “Yo Soy Costa Rica” Is Here for Great and Small Entrepreneurs