Getting Started on Legal Residency in Costa Rica

When you decide to pursue legal residency in Costa Rica, finding the right lawyer to guide you through the complex laws and Tico bureaucracy will be your most important first step. Although some people do achieve resident status without the aide of a lawyer, for my husband Layne and me, it was a no-brainer that we would need help. For one thing, all the documents required by the Department of Immigration in Costa Rica must be translated into Spanish. Now I don’t know how good your Spanish is, but mine was certainly not up to that task. Naturally, Costa Rica’s laws are written in Spanish as well, so a knowledgeable bi-lingual guide who can make sense of all the murky details is essential.

To begin the process, Layne and I each had to have eight passport-sized photographs taken, four to be attached to our application for residency and four that we would bring to the Ministry of Security when our fingerprints were taken. At a local photo studio in town we quickly got the pictures done at a cost of less than $5.

After registering online with the U.S. State Department as tourists living in a foreign country, as our attorney had instructed, we met with her to sign a contract for her services and to pay her the first of three installments of her total fee. She then drove us into San Jose to have our fingerprints taken for submission to Interpol.

We had been warned of long lines and lengthy waits as an inevitable part of the residency process, and the fingerprint procedure proved the point. In fact, the mantra here is “Patience, patience, patience and always carry an umbrella.” At the police station, we joined some two dozen Ticos and a few Gringos compliantly lined up outside in chairs or sitting on a low concrete wall. The wait seemed interminable, but with the timely intervention of our attorney translating at several critical points, we were finally called inside. The scene was a Third World tableau of peeling light green paint and bored bureaucrats seated at ancient metal desks. Despite that first impression, the clerks were working on modern computers and the process of answering questions and fingerprinting took only a few minutes.

Next stop, the U.S. Embassy to get proof of our Social Security income. To obtain pensionado or retiree status, you must provide evidence of a lifetime guaranteed income of at least $1000 per month, most commonly from Social Security. When we arrived, however, we learned that section of the Embassy is only open from 8:00 a.m. until 11:30 a.m. weekdays, so the following morning Layne and I returned by bus and obtained the needed documents with little bureaucratic hassle and a short wait, quite a contrast to the fingerprinting experience. 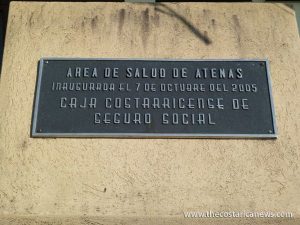 A few weeks later (early May), our tourist visa was soon to expire and we found ourselves rushing to complete essential tasks before our return to the United States for the summer.  The new residency law was in effect, but with no regulations for implementation yet published, confusion reigned. In an abundance of caution and based on a seemingly reliable newspaper report, our attorney advised us to join Caja Costarricense de Seguro Social, the nation’s socialized medical insurance plan. Previously, this requirement only kicked in after residency had been granted, but given the ambiguity of the new law, the consensus was that it was now required as part of the application process. Complicating our situation was the fact that Layne and I would be out of the country, so in order to pay the monthly Caja fee online from the U.S., we would also need to open a bank account at Banco Nacional.

With little time remaining, we headed to the Caja clinic where we expected to obtain the proper forms to join. But after going from one office to another, struggling to communicate in my limited Spanish, we finally learned from an English-speaking doctor that we were in the wrong building! Around the corner was the Seguro Social office and it was there we could obtain the application. Off we went, only to find the building with a “Seguro Social” sign locked up and abandoned. Luckily, it was adjacent to a small clothing store where we had shopped the day before and when the friendly Tica proprietor noticed our bewilderment, she pointed to the correct entrance, set back off the sidewalk and hard to spot. To our dismay, she also told us they had just closed for the day only 15 minutes earlier. Patience, we said with a sigh.

The next day we returned and managed to acquire the right form. Alas, it was all in Spanish! But our attorney came to the rescue, patiently walking us through the application by phone. The following day, we returned to Seguro Social to see the inspector who would approve or deny our application. After looking over our papers — rental contract and electric bill to prove we were living here, a copy of our marriage certificate, Layne’s Social Security income statement, passports — he typed up a form with Layne’s Caja membership number on it and sent us on our way. No problema, we thought. We headed to the bank to open an account and after another long wait, we met with the English-speaking bank official who noticed in our paperwork that the Seguro Social inspector had checked the wrong boxes: one indicating Layne was single instead of married, and another indicating we were living in a house we owned instead of a rental. Still more patience needed and a sense of humor! Back we went once more to the Seguro Social office, and after only a short wait we obtained the corrected Caja membership form.

Our saga continued at the Caja Clinica where I was to apply as Layne’s dependent. But the clerk behind a thick glass window spoke Spanish so softly, I was unable to understand him and we left empty-handed. Once again we relied on our attorney for help. At our meeting a few days later, she translated the forms, then waited patiently in line with us at Caja to complete the process. Imagine a U.S. attorney waiting in line at no extra charge!

As you can tell, this rigmarole is not for the faint of heart. Still, everyone we dealt with during the process in Costa Rica has been friendly and helpful, sympathetic, and yes, patient.

With our duties completed here and our visa running out, we returned to the United States where the residency process continued on as we acquired the mandatory documents and had them authenticated, a series of challenges which I will detail in my next installment.

Did you miss Kat’s previous column on Residency in Costa Rica? Don’t worry, you can catch up by clicking here!

Hunchbacks, with longer necks, and claw-shaped hands; this is what human beings would be like in the year 3000,...
Environment