First of all; what is a cognate? It is, in a general sense, any word or term that not only looks alike or similar between 2 languages but that also has an equivalent meaning, usually derived from a common lexical root. This fact is particularly important in countries where there are colonies of migrants who speak a native language different from the official one spoken in the host country.

Since Costa Rica has received a considerable number of people coming from other places of the world, especially expatriates from the United States of America, we are going to start a short series of articles talking about English-Spanish cognates. That is why this will be the first part of such articles, and we are almost sure that you will find them pretty interesting to learn.

With the purpose of facilitating the learning of cognates between these languages, they are described according to the following criteria: a) their orthography; b) their semantic similarity; c) the number of grammatical functions they may have. In this issue, we are going to show English-Spanish cognates which only differ in terms of orthography.

When taking the orthographical aspect into account, it is worthy to mention that cognates may be classified as homographs, quasi-homographs, and mini-homographs.

Homograph cognates. They are those words written exactly the same in both languages and that also have the same meaning in their most frequent connotation, even when their way of pronunciation may vary. Most of them are nouns or adjectives. Here there are some examples: axial, ángel, base, cable, carbón, central, conductor, doctor, dosis, era, especial, gradual, halo, hotel, hostal, idea, ítem, lineal, manual, motor, motel, mortal, nuclear, oral, pasta, piano, plan, ritual, reactor, solar, televisión, tractor, usual, verbal 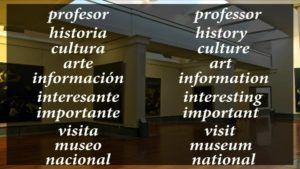 However, despite the orthographical similarity, sometimes it is not so easy to identify the equivalent cognate in Spanish. Examples: alligator – lagarto; ballot – voto; burnish – bruñir; rocket – cohete

But there are also quasi-homograph Spanish cognates which are likely to be confusing. Such case is, as an example, best represented by the adjective inflamable. This confusion comes out of the fact that the prefix in- is used in either English or Spanish to mean the “contrary” idea to the one expressed by the word at which that prefix is placed right before.

Other examples are infrecuente meaning “infrequent” (barely frequent); ingratitud meaning “ingratitude” (lack of gratitude); incoherente meaning “incoherent” (with no coherence); inválido meaning “invalid” (with no validity). That is why you could think of inflamable as meaning “that cannot be burned” when, actually, it is meant just the contrary idea; “that can be burned”. By the way, in English, the correct contrary idea is expressed with the term “non-flammable”.

Mini-homograph cognates. They are those words which, despite they come from a common lexical root, have been written in such a way that it is difficult to be recognized as cognates. Examples:

On the other hand, we should observe that there are also a good number of English words considered as tricky homographs. They are those written the same or almost the same in both languages, but they are neither semantic equals nor derived from common lexical roots. Examples of this kind of cognates are: antes, as, ateo, cana, calmado, dote, formar, gusto, mano, meter, pan, pie, red, ropa, sales, son, sudar, tapa, taller, tripa, vano, zapato

It is also worthy to mention that there are cases of words showing a mistakenly orthographic similarity that have been translated into Spanish on this basis and, because of the continued colloquial use of that translation, that equivalence has been accepted as valid -although it has been built on a wrong basis.

As a typical example of this case, we show the word “range” -with each of its different meanings in English- which is often mistranslated into Spanish as “rango” (assumed just in the sense of the English word “rank”) in certain fields of science. Another similar case is represented by the verb “to apply” meaning “aplicar” in a Spanish general sense, but that also means “making a request” (as to get a job, or to obtain a quota at a specific university, etc.).

To finish, we will continue this series as soon as possible. For the moment, why do you not take advantage of looking for more meanings of common cognates in your bilingual Spanish-English dictionary? We are sure that you will learn much more cognates than the ones shown in the previous lines. So long!