The global Occupy movement focuses on the 99%, but what about the poor 1%? Eating the rich won’t end starvation.

They’re getting the negative focus, and should for the most part. Even so, have pity on the rich, if for no other reason than pity bothers them more than anything.

One of the best features of this swelling town of about 100,000 in northern California is (or rather was) the ‘viewshed’ of the foothills and canyon a few miles beyond. But the 1% has all but destroyed it in the last few years.

When the monstrosities were first being built, I thought they were a string of apartment buildings along the sloping ridgeline at the entrance to the canyon. Having spoken before the City Council years ago about the cheap, haphazard development during the boom years (and with it the erosion of the very qualities that drew people here), I was dismayed, to say the least, that they had approved monster houses for the rich along the ridgeline.

You can live in a 10,000 square foot house and still be a cheap person. Indeed, most rich people are cheap. But it’s simply not true that “the rich aren’t like us.” They are us, just with money.

During this period, while hiking in the canyon beyond town, I ran into a board member of the leading environmental group, ‘Friends of Bidwell Park.’ I asked him if he knew about the construction going on at the mouth of the canyon. He said he did.

Having heard of one of the group’s pet peeves and petty projects, I then asked him about their fight to reclaim a small strip of land along the mountain highway out of town, from of all people, Frisbee Golfers.

Why are you going after college kids and poor people, who don’t have the money for any other form of recreation, rather than opposing the destruction of the viewshed and the core values of the town?

“You fight the battles you can win,” he inanely replied.

So you win if by evicting college kids and poor people from playing Frisbee Gold along a bit of land by the highway? I think our conversation ended there.

There you have it, the dynamic by which America has gone from a great country into a small people. The progressive media likes to say it’s because of leaders we don’t deserve. But I submit we’re getting exactly the leaders we deserve. Indeed, despite the glaring disappointment in Obama by the dwindling number of Americans who still give a damn, he may be better than we deserve.

Some years back, before the local environmental atrocity took place, I talked with an indigenous man from Central America that lived in the same apartment complex I did. He said he knew most of the Native Americans in the area, and that the place overlooking the fields and foothills, where I take my sittings when Little Chico Creek is running, was their most revered spiritual grounds.

We talked of encounters with rattlesnakes, coyotes, long-eared rabbits, and kite hawks before the town overtook the wilds, and all but denuded them. He then told me the almost mythic story about a septuagenarian Indian woman in the 1920’s, forcibly relocated with the last remnant of her people to a reservation near Bakersfield (some 300 miles south, at the other end of the Great Central Valley). Deeply unhappy on the reservation, she walked all the way back to Chico, and became a legend.

Now, when I take my sittings under the sycamore along Little Chico Creek, and look up toward the canyon to see the massive windows of the obscenely wealthy denizens glinting in the sun, I reflect, without ill will, the darkness of the town back to them, while asking that their children be protected. (After all, whatever the karma of the children born to the 1%, they are still children, and like children everywhere, need protection, sometimes from their own parents.)

It’s not enough that the privileged get the lion’s share of collective darkness however; they also need to mirror the structural inequality back to the 99%. Otherwise, even if we dislodge the rich from their perches above our towns and cities, we’ll just elevate another 1% to the 1%.

The long and short of it is that if you believe that there’s an inherent difference between the 1% and the 99%, you’re part of the problem, not the solution. We can neither eat the rich, nor excrete their toxicity from the body politic that easily. 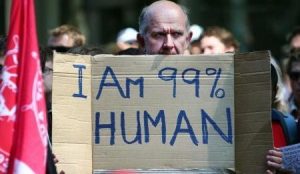