Costa Rica is at the forefront of renewable energy production in Central America and is one of the countries that has invested the most in this regard on a global scale, this has been possible due to its natural resources and also due to the strong commitment to energy renewables made in the Central American country.

During the past 2017 for example, Costa Rica achieved the admirable 300-day in a row mark in which its electric system operated with exclusively renewable sources, mainly water, besides the production of renewable energy covered 99.62% of the electricity needs of the country. A mark that also exceeds the records of 2015 and 2016.

This success is based on the huge hydroelectric plants do most of the work. Today, 78.26% of the electricity used nationally comes from water. The combination also includes 10.29% of wind energy, 10.23% of geothermal energy and 0.84% of the sun and the biomass. In other words, renewable sources satisfy 99.62% of the country’s electricity needs. While on the one hand, photovoltaic energy still has a marginal part, on the other hand, wind energy is one of the sectors in full development in the country. The growth trend since 1996 (the year of the first wind farm in Costa Rica) to date has experienced a small but consistent acceleration. So much so that, according to the JEV, 2017 can be considered as the most important year for the generation of wind energy in the national history, with 1,015-Gigawatt hours generated by the 16 wind farms installed in the territory. 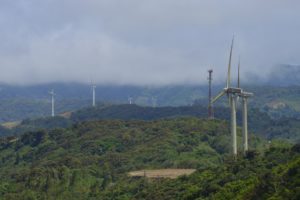 Costa Rica is prone to hurricanes and tropical storms on its Caribbean coast, as well as being an area with seismic risk and a large number of volcanoes, what makes the generation of renewable energy even more important, and a sample of the importance of this investment and concern to generate renewable energy is the fact that during the passage of the tropical storm “Nate” in October 2017 the country managed to maintain its electricity supply through generation plants that use renewable sources, and could even help its neighboring countries exporting energy to the Regional Electricity Market (MER).

The nation promotes a system Electricity quality, renewable and solidarity since 1949 through The Costa Rican Institute of Electricity (ICE) promotes and strengthens a model based on sustainability, equal access, and  national security, together with the exploitation of natural resources in full environmental harmony

Costa Rica, has the most modern National Center for Energy (CENCE) in Central America, this important architectural work that serves to control the flow of national electricity was inaugurated in November last year and is located specifically in San Miguel de Santo Domingo of Heredia.

CENCE directs and manages the operation of the National Electric System (SEN) to meet the country’s electricity demand and make effective energy exchanges -import and export- with the Regional Electricity Market (MER).

This intelligent building, of international avant-garde and with first-world security, guarantees renewable and quality energy, which potentiates the country’s electric model, while consolidating it as an investment destination, was built between March 2016 and November 2017. The project was financed mainly by the Inter-American Development Bank (IDB). The absolute investment amounted to US$ 59 million and houses about 200 workers. 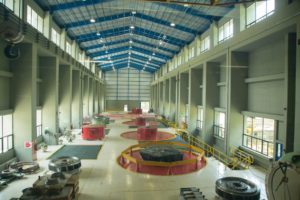 The center has A high-quality management and monitoring equipment – known as SCADA – provided by the company Asea Brown Boveri (ABB) and replacement to The old building was located in Sabana Norte and was relocated according to the strategic planning of the Costa Rican Electricity Institute.

Today, transnational corporations with high electricity demand choose the country to convert it into their center of operations for the sustainability and reliability of the service. This implies for ICE to make the investments that guarantee reliability for the coming decades. An example of this is the nucleus that is located in El Coyol de Alajuela.  A project that incorporates a section of transmission line of 230 Kilovolts (kV) -of 3 kilometers in length- and a substation with 2 transformers of 230 / 34.5 kV.  For a processing plant of 40 thousand m2 from 35 municipalities in the country.