Cartago, the Caribbean area and the southern area have been the sectors most affected by the heavy downpours this...
Read more

With nonstop flights from Miami and Orlando, the low-cost airline Frontier will once again operate in Costa Rica, as...
Read more 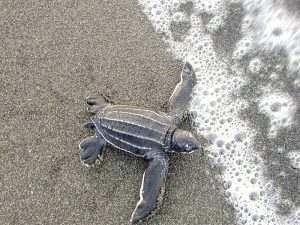 The nesting of sea turtles is one of nature’s most amazing spectacles. Green Turtles nest along the beaches of Tortuguero National Park from July to October.

The Leatherback Turtle is without a doubt the most important attraction at the Marino Las Baulas National Park, in fact this specie was the main reason for the creation of this protected area, and specially for being in danger of extintion. There are various nesting sites at this national park, including Langosta beach, Grande beach and Ventanas beach. The nesting season goes from October 20th through February 15th.

Hawksbills and Loggerheads, less common, nest along the Caribbean during the summer months. The Olive Ridleys nest in the Ostional National Wildlife Refuge and Playa Grande on the Pacific coast, coming ashore in large numbers for several days each month from August to September.

Sea turtles are most frequently seen when the females come ashore to deposit their eggs on beaches, usually at night. They may also be seen feeding in coral reefs by snorkelers and divers. Please remember: only one of every 5,000 baby turtles will survive to reach adulthood, and Costa Rica is one of a handful of countries that protects turtle nesting sites.

It is vitally important that the turtle successfully lays her eggs. Noise and bright lights can frighten turtles and cause them to return to the sea. The use of flashlights or cameras is prohibited around nesting sea turtles. Seek a qualified guide to accompany you. Obtain a copy of, and obey, park rules when on the beach with turtles.

Turtles and Places of it Spawns

I also recommend the site http://www.anywherecostarica.com/maps/turtle-nesting for a great map
From TravelExcellence.com

Cartago, the Caribbean area and the southern area have been the sectors most affected by the heavy downpours this...
Read more
Travel

After so many months without being able to move with full freedom, it is to hear the word travel and immediately our faces light...
Read more

The Central American Bank for Economic Integration (CABEI) announced today that it will be executing a non-reimbursable Technical Cooperation for $ 600,000 which was...
Read more

A group of scientists has documented for the first time the migration, almost in real time, of a pregnant female hammerhead shark (Sphyrna lewini)...
Read more

Climate Change, More Difficult to Combat than the Pandemic?

Our planet is living very serious moments, due to the serious consequences through -bad human action-. Beyond a worldwide Pandemic, climate change appears to...
Read more
- Advertisement -