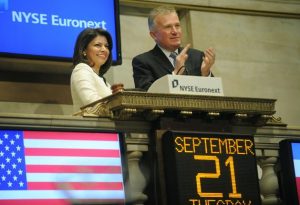 Amidst the political and social turbulence that plagues many of the Latin America countries, Costa Rica has been able to sidestep that. The economic, political and social stability of Costa Rica is one characteristic that has distinguished it through its entire contemporary history and as one of its most important strengths, has enabled it to reach great success in luring foreign investors.

Costa Rica’s government has been a stable democracy since 1949. The country’s success was recognized in 1987 when President Arias Sanchez was awarded the Nobel Peace Prize. The award was granted for the president’s high ethical standards and the image that he portrayed as a representative of the Costa Rican people. The people share in his high ethics and morals. They are recognized to be among the top educated and socially aware people in the world.

Costa Rica was the first country in the world to constitutionally abolish its army. Following civil war in the 1940′s, Costa Rica ended rule by armed forces and established a democratic republic. Since 1949, the Costa Rican government has been a stable democracy that is governed by a strong, democratic constitution. Even before the current democracy was established, the Costa Rican government stemmed from a political tradition of rule by the majority. Its government has also been able to work towards pacification and successfully avoid the widespread violence that occurs throughout most of Latin America. Costa Rica is one of the most stable governments in the region.

For the past twenty years, Costa Rica has not experienced any economic crisis. For a developing country, that is a great accomplishment. Poverty has been reduced from 40 percent of the population to below 20 percent of the population, which is over a 50 percent reduction. The average economic growth rate of the country is approximately 2.5 percent each year. Costa Rica has increased their participation in world trade as well. Exports rose from 30 percent of the GDP in 1980 to 50 percent in 2000. The increase in trade has led to an expansion of the economy and greatly reduced the economy’s vulnerability to financial crisis. As the Central American Free Trade Agreement (CAFTA) was implemented, Costa Rica was further integrated into the world economy and economic stability was further established.

With a $1.9-billion-a-year tourism industry, Costa Rica stands as the most visited nation in the Central American region. Most of the tourists come from the U.S. (54%) which translates into a relatively high expenditure per tourist of $1000 per trip. In 2005, tourism contributed with 8.1% of the country

When thinking about brain health, people focus on conditions like Alzheimer's, but the truth is that the risk of...
World News

We Are In The World Cup! Qatar Will Vibrate With the Tricolor

Hanna Gabriels: An Athlete with Strong Gloves and a Kind Heart

8 Tips to Save Energy Consumption at Home