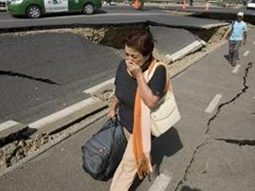 Chile was struck yesterday by an earthquake registering 8.8 degrees on the Richter scale, one of the strongest in history, which killed at least 708, with 15 missing and leaving two million homeless.

President Michelle Bachelet declared the central and southern areas of the country disaster areas where the quake occurred at 3:34 am (12 midnight in Costa Rica), destroying roads, hospitals, churches and homes.

“The forces of nature have severely beaten our country and once again test our ability to face adversity and stand up,” he said.

However, the president asked the international community not to send further aid until they have identified the needs of the country.

The earthquake was felt as far as Sao Paulo in Brazil, about 2,900 kilometers to the east. Several aftershocks were felt during the day, one almost as strong as the 7.0-magnitude quake that devastated Haiti on Jan. 12.

The president asked the population to remain at home, postponed the beginning of school for a week.

Minister of Transport and Telecommunications, René Cortázar, asked Chileans to use the phone and make trips only when absolutely necessary.

In Concepcion, 500 miles south and one of the areas most damaged, a 14 story building collapsed and firefighters are making an effort to rescue trapped persons.

In the Juan Fernandez archipelago, 660 km off the Chilean coast, a wave that penetrated up to three km on land resulting in reports of 11 missing.

Authorities are trying to reach all locations and are carrying out searches and rescue efforts for victims across the central region.

The director of the National Emergency Office, Ministry of Interior (ONEMI), Carmen Fernandez, said that one of the hardest hit localities is Talca, 105 kilometers from the epicenter.

The historic center of town, with most adobe buildings, collapsed almost entirely, although most buildings house shops that were empty at the time of the quake.

The earthquake triggered a tsunami in the Pacific, causing damage in Peru, Ecuador and Guatemala.

Other more distant territories remained on alert as in Hawaii, where sirens sounded, and even the U.S. west coast was put on alert.

U.S. authorities raised the alert to Hawaii and California however the quake generated only small waves on the U.S. islands.

However, a huge wave came struck Talcahuano, one of the main ports of southern Chile. The tide left some boats on land, according to local television pictures.

Santiago airport remains closed due to damage. According to the government, the control tower is damaged, however, a policeman at the scene said that half of the terminal was destroyed and the state channel TVN said it could be closed for three days.

Telephone communication is poor and some copper mines closed due to lack of electricity.

One of the highways in Santiago was destroyed, with blocks of structure barefoot and cars trapped in debris.

The Office of the Defense Representative of the United States of America Embassy financed with US$ 3.5 million the...
Culture & Lifestyle