Today will be held the Art City Tours second edition of the year. The event will begin at 5 pm and continue through the night until the end at 9 pm. The program of night tours will gather dozens of free activities in different cultural spaces of the capital. This month’s edition will be called “Chepe nos une”, a name that honors the importance of the city of San José, the capital of Costa Rica, as a meeting place and cultural exchange, a link between history, heritage and tourism, core center of the tico society.

A night where you can enjoy the wide and alive cultural offer that San José and its surroundings offer. The Art City Tour will connect activities that will be developed in museums, galleries, cultural centers, design stores and heritage buildings of the San José Center, Barrio Amón, Barrio Otoya, Barrio Escalante, Los Yoses and Sabana. These routes can be interconnected through various modes of urban transport such as the bus, the bicycle, and the walking route.

This evening, the Art City Tour achieves fifty consecutive editions, the cultural program have been held since 2010. According to the publication GAM Cultural, more than 90,000 people have participated in these free tours through the main artistic spaces of the Costa Rican capital. 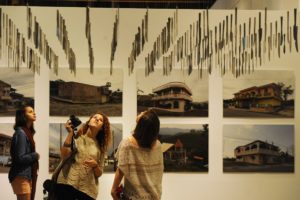 One of the major points of interest of this edition of cultural night tours is the Museum of Contemporary Art and Design (MADC). In room 1 you can find “Simply landscape”, an exhibition by Alejandro Villalobos. The painter portrays, in an unconventional way and without tourist concessions, some places in Costa Rica. In rooms 2, 3 and 4 are “Cuadra Cero”, a false historical archive of the artist Stephanie Williams. In the work, the artist plays with the irony of a fictional documentation that gave life to an unequal, authoritarian and patriarchal Costa Rica.

At the National Gallery, located in the Children’s Museum, the Cultural Week of Japan 2018 is celebrated. This festival will be part of the Art City Tour thanks to the exhibition of Japanese ceramics Yakishime “Metamorphosis of the Earth”, the exhibition of watercolors of the Costa Rican Association of Watercolourists (ACA) and the presentations of origami, Japanese calendars, and bonsai. 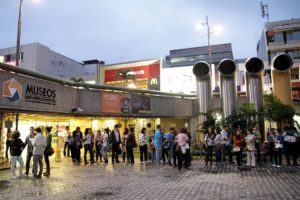 The French Alliance will open the doors of two exhibitions, the first one, on the outside of the enclosure will be the work of Guy Delisle, a Canadian cartoonist who has been recognized for his travel chronicle publications. The second, within the alliance, is the visit of the Cabinet of Linguistic Curiosities, an exhibition about old articles with curious stories.

The Despacio gallery will present the installations Festival of Minimal Actions, a performance by the German Thomas Geiger, where he will perform twenty-eight performances by Latin American artists. Also, Maya Rochat presents “The river as a rock”, an exhibition that aims to understand photography beyond a reproduction of reality.

The Art City Tour also will feature two presentations of SOLODOS en Danza, a festival and a contemporary dance contest that will end its tour this week. The presentation will be in Plaza Skawak, in San José. For more exhibitions, you can visit the National Museum of Costa Rica and the exhibitions of Pre-Columbian History, History of Costa Rica in the XVI-XXI centuries, Illustrated nature, Crossing the Coco Island, among others. 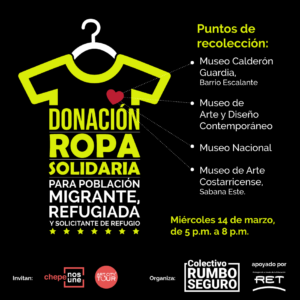 With “Chepe Unites Us” the Art City Tour also invites you to join in a gesture of solidarity with the migrant population, refugees and asylum seekers. This social initiative is based on the collection of clothing donations. The collection points for donated clothing will be the Calderón Guardia Museum in the Barrio Escalante, the Museum of Contemporary Art and Design, the National Museum and the Costa Rican Art Museum in Sabana Este.

Another of the benefits of Art City Tour is free to access to all participating cultural spaces as well as free transportation throughout the tour with three possible modes: bus, bicycle and on foot. The program was also declared of Cultural Interest by the Presidency of the Republic and the Ministry of Culture and Youth in recognition of its benefits for the city.

During this Art City Tour “Chepe nos une”, entertainment is guaranteed as well as the possibility to enjoy a large number of galleries and artistic events, all on the route of this wonderful cultural event.

How Not to Look Bored when Networking?

Anniversary: The Costa Rica News, 14 Years in the Hearts of those who Love Costa Rica