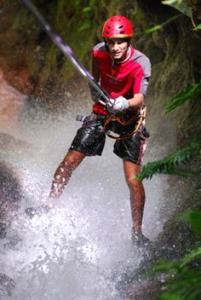 So there I was about to go over the ledge at the top of a 210-foot waterfall in a place called Lost Canyon near an active volcano, when I began to have doubts about Costa Rica’s hottest new eco-adventure craze.

The guide standing a few feet above urged me to release my grip on the rope. Within seconds, I had slid to the base of the waterfall that looked as dangerous as “The Lost World.”

“Canyoneering” is a fancy way of saying we hiked down a tropical jungle stream, including rappelling about six waterfalls near the active Arenal Volacano.

About 100 ziplines through jungle canopies have blossomed across the country. By contrast, there are only about 10 canyoneering tours available, said Suresh Krishnan, founder of Desafio Adventure Company, which offers this thrilling one.

“Canyoneering is up and coming and Costa Rica is the ideal place to do it because of the unique environment and lush, tropical waterfalls,” says Krishnan, who runs the company with his wife Christine.

Krishnan, a native of India who was raised in southern California, is a graduate of the U.S. Army Air Assault School; he got experience by rappelling from helicopters, including in neighboring Panama.

He started his company in 1992 at La Fortuna, a sleepy town near Arenal, and through exploration of local jungles, 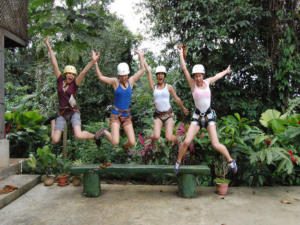 found this river’s waterfalls and named it Lost Canyon because it’s not located on local maps.

What’s impressive is Krishnan’s insistence on safety. In the early 1990s when the zipline industry in the country began, there were a few accidents, including some deaths.

I was confident the tour was safe enough to bring my wife Cynthia, our 16-year-old daughter Nicole and our 13-year-old nephew Justin Castillo, all of whom now love canyoneering.

The two-hour trip didn’t have tough trails to climb and was as wet as jumping into a waterfall can be. During my more than 20 years of taking Costa Rican tours like kayaking, ziplines and all-terrain vehicles, canyoneering was the most fun.

We also spent a week at Jaco Beach, which is like the Jersey Shore of Costa Rica. The beach isn’t the prettiest in the country. Try Santa Teresa where New England Patriots quarterback Tom Brady and supermodel wife Gisele Bundchenhang out.

Jaco is popular among surfers and middle-class Costa Ricans who can find affordable cabanas here.

A beautiful new pothole-less highway, finally completed after more than 20 years, connects the capital city of San Jose to Jaco, reducing the prior three-hour drive to one hour.

Jaco has far more high-rise buildings than when I first visited 24 years ago, though there are still plenty of places to get away from the crowds.

I enjoyed the beach restaurants, which offer cold Imperial beers and arroz con pollo after a dip in the warm ocean.

Some travel books disparage Jaco because of prostitution and illegal drugs, neither of which were overt during our visit.

If you want a prettier and more expensive beach without surf, an hour’s drive south is Manuel Antonio National Park, which has white sand adjacent to a jungle where monkeys hang out — a beautiful site.

For an active night life, a 2 1/2 mile-long beach to walk on, inexpensive hotels and restaurants, fun waves to surf and being close to San Jose, Jaco isn’t bad.

Tips: Costa Rica continues to discriminate against foreigners by charging them $10 each to enter a national park, about three times the rate for a Costa Rican.

Rental-car insurance is still a national tourism scandal: Expedia Inc.’s Carrentals.com booked me a rental for $157 a week. When I arrived to pick up the Toyota Yaris, Thrifty Car Rental charged me another $244 in insurance alone for a total of $401. When I complained to both companies, they defended their fine print tactics. I don’t recommend either company for Costa Rica.

Copa Airlines (CPA) has a 10-hour layover in Panama City, allowing plenty of time to sightsee the canal and sip mojitos at the Casa Blanca restaurant in Old Panama City, which is a World Heritage site. It’s well worth a stopover for a day or two.

From Bloomberg by Peter Brennen

Swimming aims to become "the first sport" to put into operation an "open category" in which transgender athletes can compete.
Health