I have to admit, I am a hopeless romantic. I love romance, I love love and even the heartache that sometimes comes with it.

It is one of the integral reasons entwined with many of why I left Australia to live on this continent of the Central and South Americas.

When I saw the film Like Water for Chocolate in my late teens I was sold. That film cemented the fate of a life long love affair with the romance, drama and heartache portrayed in Spanish literature and cinema.

There is a romantic novel of the American tropics by William Henry Hudson called “Green Mansions” . Abel the young hero, is lured into the jungle by the haunting siren song of an unseen bird.

As he journeys deeper and deeper into the jungle he discovers that instead of a bird the call comes from a  gorgeous half wild girl, Rima. Her mimic of the bird sounds was so haunting that it was as if it were the birds themselves singing.

In that way I feel each day I am being lured further and further into the jungle of Costa Rica that is around us.

With its animals, scents, sounds and sheer density of life it is creeping under my skin a very good way. I am finding it harder and harder to leave. I am finding more and more reasons to stay.

Right here in the green.

From music festivals to bird songs

In particular the bird songs. In a way they have rewired the soundtrack of my life.

Quite a statement I know, but I use to organize music events in Sydney Australia, sometimes with up to three floors of bands playing simultaneously. After I gave birth to my wild son I began holding smaller events in the comfort of my own home, creating a space for the music to come to me.  I have always been surrounded by live music, gone to theater, contemporary dance performances, festivals and even Kirtan. Now here in my jungle home I am privy to a 24 hour orchestra of birds songs only to be replaced by the soprano insect sounds and tenor frog sector.

Boasting one-tenth of the world’s total bird population Costa Rica has approximately 850 with some texts stating up to 890 recorded bird species. With more than 600 of these being resident species the remaining fly in for the winter.

The protected lands of Costa Rica provide a safe shelter for many species that have all but disappeared in other areas of the world.

From the moment first light shows up at dawn until the last hue sets at night , birds are calling out their song all around us. And it has been said that the Costa Rican birds are not shy. This gives the tourist ample hope at spotting many brilliant specimens on their visit here. My father is an avid bird watcher. So much so it has caused him some trouble.

An older man sneaking about with a pair of binoculars has raised eyebrows with suspicion in some parts.

I am currently, with not much luck, trying to convince both my parents to come to Costa Rica and spend a whole month bird watching. Even then they would leave with hardly scratching the surface.

Sitting on my front porch at any one time flashes of yellow, purple, orange, red, turquoise blue and all shades of green fly by. As each bird protects its branch, tree territory and feeding ground area aggressive scuffles that look like winged dances across the sky break out.  Every week we spot a new bird not seen before causing one of us to yell out “Come quick!! you HAVE to see this bird. It is so beautiful!”

The trees filled with scarlet macaws.

I once mentioned to a friend that I had not seen a scarlet macaw in the wild.

The next day he arrived at my house stating he was taking us on an adventure.

Just an hour later we were pulling into a beach sporting a million dollar view with only almond trees lining the shore. It was coming onto sunset.

As we walked under the trees enjoying the cool late afternoon change in temperature he tapped me on the shoulder encouraging me to look up. There in the trees, only meters above my head were thirty to forty scarlet macaws making a huge mess of the almonds. They come every evening to feast and in no time at all the trees around us were full of the magnificent birds vying for prime position and the primo nuts.

An awesome sight to see. 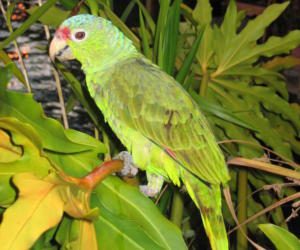 With many birds nesting and new babies hatching at this time of the year the Toucans are out in full force. Most people I speak with don’t realize they are carnivorous and are often seen pulling apart nests gulping down eggs and hatched babies.

They are not alone. Whilst on our first visit to the Mt Chirripo area last week we watched one of the most beautiful birds I have ever seen tear apart carefully weaved grasses to get to a small nest of eggs. Our delight at seeing this beautiful bird quickly turned to horror as we stood and watched whilst the mother of the nest fluttered about nearby in a panic.

With  the incredible kaleidoscope of color in this country, birds included, it is surprising to know that Costa Rica’s national bird is the relatively drab yiquirro, or clay-colored robin.  Brown with brick-red eyes the male sings during the March-May breeding season when, according to campesino folklore, he is “calling the rains.”

And slowly but surely the rains are coming in. Boosting the jungle with more life, vibrancy and song form every living thing.

Regardless, if it is bird, insect, frog or toad singing, the silence of the jungle is never without noise.
Hailing originally from Australia, Melissa Boord has been traveling the world on and off for the past twenty five years. A blogger, chocolate maker, clothes designer and freshwater lover, her biggest passion is raising her beautiful and wild son with the world as their classroom. She is currently living in Costa Rica and writing her first book. You can find her on Instagram and Facebook.