Perish the thought but, can you imagine Valentine’s Day without chocolate? A hamburger without French fries? A Thanksgiving Day without turkey? Or a guacamole dip without avocado? When Columbus arrived in the Americas he opened up a  treasure trove of flavors, colors, and smells.

Our palates and our tables have not been the same ever since. Did you know that cocoa beans, potatoes, turkeys, avocados and many other foods we take for granted nowadays, all come from “El Nuevo Mundo”?

A fruit with many names

This alien invader goes by many names: avocado, alligator pear, palta, aguacate, Persea Americana (the scientific name) and its original name is ahuacatl, which is Nahuatl for testicle. The reason is evident: ahuacatlis are usually pear-shaped, grow in pairs, and hang droopily from the tree.  In any case, avocado has become a global fruit.

It is believed that the ahuacatl first appeared in South Central Mexico.

Archeological findings indicate that avocados have been a part of the Mexican diet for thousands of years, beginning as early as 5,000 BC.

Tribes like the Inca in South America and the Olmec, forerunners of the Maya, and the Aztec, grew domesticated avocado trees.

The avocado was a symbol of fertility and love among the ancient Aztec. Nowadays some fans consider it an aphrodisiac. 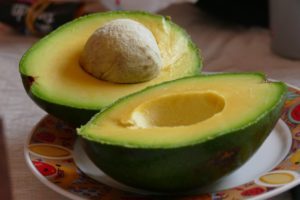 The first Europeans to eat avocados were Spanish explorers in the 15th century. The word “aguacate” is their version of its indigenous name.

Martín Fernández de Enciso, a Spanish navigator and geographer, was the first European to describe the fruit in his book Suma de Geografia (1519).

In spite of what most people believe, the avocado is not a vegetable but a fruit, a berry with a single big stone.

There are about 500 varieties of avocado in the world and the most cultivated is the Haas. This variety comes from a supposedly Guatemalan seed planted in 1926, in an orchard in the Habra Heights in California by Rudolph Hass. He patented the tree in 1935.

Mexico is the world’s leading avocado producer, with more than 35% of the total. Last year, Michoacán, a Western Mexican state on the Pacific Ocean, sold 945,000 tons of avocado to Europe, Asia, Canada and the United States, which acquired about 90% of the production. Mexico’s runner-ups are Dominican Republic, Peru, Indonesia, and Colombia.

California and Florida are the biggest avocado producers in the United States.

The most significant event for avocado growers is the National Football League’s (NFL) Super Bowl. Why? On the first Sunday in February, the United States hits peak avocado frenzy. More than 160 million avocados imported from Mexico have consumed along that week, as thousands of fans prepare and eat tons of guacamole.

The “Bright Side” of Avocado

Avocado tastes good. Its yellow-green flesh has a smooth texture, the consistency of butter and a flavor reminiscent of walnut and hazelnut and sometimes with hints of sweetness.

It is so versatile that it can be used not only in savory recipes, arguably the most well-known but also in sweet dishes. For instance, in Indonesia, the Jus Alpukat, a popular creamy, sweet smoothie, is prepared with avocado, condensed milk, and chocolate. In Vietnam, avocado, locally known as butter fruit, is the main ingredient of a similar dessert, “Sinh To Bo”.

Avocado is simply good for you. Fresh avocado reduces the risk factors for cardiovascular disease. It also contains a lot of good natural fats and is a big source of more than 20 vitamins, proteins, amino acids, minerals, and fiber.

It is cholesterol and sodium free.

It has more potassium than a banana.

Some studies indicate avocado is good for digestion, decreases the risk of depression and protects against cancer.

Avocado can help you look better. The fruit has become the ingredient of choice in many beauty treatments and products. Its natural oils can penetrate deep into the skin so it is used to treat sunburns, reduce wrinkles, soothe and nourish dry facial skin. Avocado is also used to rejuvenate and moisturize the scalp and to repair damaged hair.

That the fruit has become a big business that reaps thousands of millions of dollars a year should make producers very happy. It does, but the fact also had unexpected consequences. In Mexico, some drug lords, who called themselves La Familia Michoacana and The Knight Templars, smelled a new business opportunity and tried to take control of the avocado farms in Michoacan.

That triggered a very bloody turf war that lasted several years.   Civilian, heavily-armed self-defense groups joined forces with the police to protect the valuable crops and the growers. It got so serious that growers fund Tancitaro’s* Public Security Force (CUSEPT in Spanish) Today, even though government authorities have declared that these criminal organizations have been dismantled, others have come out and sense of uneasiness remains.

Tancitaro, a small city in western Michoacan is considered “the avocado capital of the world”.

Since May 2015, a bloodless avocado dispute between Mexico and Costa Rica has made the headlines. On that date, Costa Rica decided to ban the importation of Mexican avocados of the Hass variety. The point of contention is that there is a risk of the Sun blotch viroid entering the country and infecting the local crops. Data from the Chamber of Industry and Commerce Mexico-Costa Rica (Cicomex), indicates that out of 15,000 tons of avocado Has consumed in Costa Rica, 12,000 came from Mexico.

The Mexican government argues that the decision did not take into account all the necessary scientific elements, that there is no risk of contagion of the disease and that the real reason is old-fashioned protectionism towards local producers. As a result, Mexico took the dispute before The World Trade Organization (WTO). As a result, Costa Rica and Mexico are still looking for a settlement if they are the Hass avocado conflict outside the WTO.

Avocado has gone from humble prehistoric berry to modern superfood. It can be found literally everywhere. Peru, Israel, South Africa, Chile, China, Australia, Spain, just to name a few places, all grow the “green gold”. It is worth millions of dollars in trade and associated products and global demand keeps growing. So no matter if you like it as guacamole or sushi, as a sweet smoothie or part of a salad, the ahuacatl is here to stay.