A Vegetarian Among Meat-eating Spiders

For years, scientists were confident about one uniform trait of the world’s 40,000 spider species: They were meat-eaters.

So you can imagine the eureka moment when Brandeis senior lecturer Eric Olson realized a jumping spider he found in Costa Rica was a vegetarian.

That’s odd enough but how Olson – and another researcher from Villanova University – discovered Bagheera kiplingi (yes after the Jungle Book) is also a valuable lesson in re-examining old assumptions about how the world works. 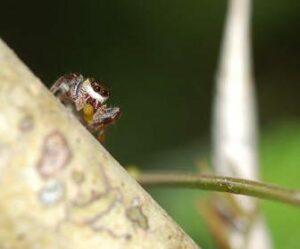 Here’s the story: Researchers had known for decades that a stinging group of ants and an acacia tree had a symbiotic relationship: One could not survive without the other. The ants feed primarily on melon-like acacia food that is so nutritious virtually nothing else is needed to keep the ant colony going. The ants, meanwhile, defend the tree from other plant eaters so successfully researchers believed few other insects lived on the tree. In fact, experiments have shown that ant acacia trees can’t live without the ants: Ant-less trees allows herbivores to take over and kill the tree. If you’ve taken Ecology 101, you’ve probably learned about the special relationship.

Enter Olson who began a long term spider inventory in Costa Rica in 1999 (as part of a larger forest study). He focused in on jumping spiders, famous for their bright colors, courtship dances and foraging behavior. His assistants would bring back spiders for him to identify, a task that broke up otherwise tedious work. Olson specifically told them not to go near the acacia tree: Of course there would be no spiders. And the ants could deliver a nasty sting with their tails.

Still, In 2001, a volunteer brought him a jumping spider found on an acacia tree. An email Olson sent me takes it from here:

“So I asked these sweet volunteers of mine, “what in the world were you looking at ant acacias for, during this spider survey?” I asked this because I just “knew” that no spider could possibly exist on this tree. And the answer was, they were just watching the ants, for fun really, and by chance they noticed a jumping spider at the same time. So fine, a spider had been found on an ant acacia, well this was still early in the spider inventory work I was conducting, so (since no spider could possibly exist on ant acacias) I figured “this is just a fluke, it must have fallen on the plant from above just before the people found it” — and I went on with my business.

“Some weeks later it happened again, and one of my field assistants called me outside and said, “Cmon boss, let’s go see what that spider is doing” and so I went, and watched, and within about 5 minutes ZOUNDS! it suddenly grabbed (nectar) and ran off with it. I remember going into the lab at that point and announcing “Yo! See this animal, this animal shall from today and for all time be known as the Ant Acacia Jumping Spider!” And so it has come to be.” 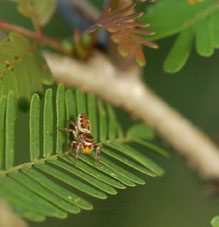 It turns out the spider’s eyesight, agility and cognitive skills allows them to avoid the stinging ants and at times even steal ant larvae to eat. The spiders don’t appear to defend the plant but rather have found a niche to take advantage of the tree and ants.

In 2007, Christopher Meehan of Villanova University independently observed the same behaviors in a spider population in coastal Quintana Roo, south of Cancún, Mexico, during a field project for a Tropical Biology course taught by Villanova professor and study co-author Robert Curry. They and Olson subsequently combined efforts to jointly publish the discovery in Current Biology this week.

“It’s humbling,” said Olson. “What is right under our nose isn’t always apparent.”