For anyone considering retirement in another country, the final months of preparation are often filled with unanswered questions about the future home. Issues of transportation, language, medical care, security and crime, cost of food and cultural norms beg for accurate information. In the year and a half my husband Layne and I have been in Costa Rica, we have adjusted to many new customs and now find much that was once foreign to us to be perfectly ordinary. But looking at these same practices with a fresh eye, it is clear that the curiosities of life in Costa Rica may seem peculiar and complicated for the newcomer. 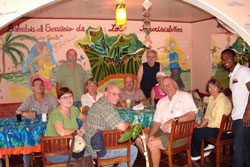 One example of the challenges in navigating a strange new world is in shopping for food. What kinds of foods are easily obtained and what is impossible to find? How do you ask for products that are not immediately visible? Is packaging different? What are the Spanish names for common items that you would find in the United States? What are the prices of staples such as milk, cheese, bread, toilet paper? How does the quality compare to what you are used to? For someone like me who loves to cook, these were important issues and my experiences in dealing with them may provide amusement as well as valuable lessons for readers.

Early on we learned the importance of at least minimal Spanish skills — that is, if you want to eat. When we first ventured into a small convenience store to buy some peanuts for a snack, we found ourselves unable to communicate this simple request. With no Spanish-English dictionary, we had no idea the word for “peanut.” Our efforts at sign language – or Cherokee, as Layne calls it — were unsuccessful. My best attempt of pequeña cosa – small thing – failed to convey my meaning. The patient storeowner wandered the aisles with me until at last, in a Eureka! moment, we happened upon the display of nuts and I learned the word for peanut: maní. That’s one I won’t forget.

Another hilarious incident occurred here in Atenas when shopping for whipping cream. Since it was a dairy product, we 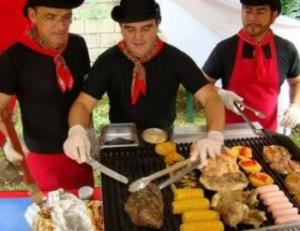 naturally expected to find cartons in the refrigerated coolers but after looking high and low alongside milk (leche) and butter (mantequilla), we couldn’t find any. So we grabbed an employee and tried to explain our wishes. I knew “crema” was the word for cream, but how to explain “whipping”? Eventually, I came up with “rica crema,” or rich cream. He smiled with understanding and pointed to a huge stack of small cartons on the floor directly in front of us. They were labeled “Crema Dulce” or sweet cream. I shook my head in disbelief. Milk products couldn’t be un-refrigerated like that, could they? But indeed, when he turned the box around, the other side said Whipping Cream. Somehow many dairy products here are packaged in boxes that need no refrigeration. We’re still trying to figure that one out.

And speaking of packaging, some items come in the most unlikely containers. Mayonnaise comes in a squeezable thick plastic bag rather than a jar or bottle. Cleaning items, such as bleach, laundry detergent and floor cleaners, are also found in sealed plastic bags that cost a fraction of the same products in heavy plastic bottles. Minimizing packaging helps keep the prices down. A popular dishwashing product comes as a long-lasting paste sold in a plastic tub and is much less expensive than liquid detergent. Sour cream, known as natilla, is sold in plastic bags. Even fragile items like eggs are often packaged in a plastic bag rather than an egg carton. Larger stores may provide cartons but the wonderfully fresh free-range eggs we get from our local pulperia are sold by the kilo in plastic bags. We carry them home very carefully!

Pulperias, the small neighborhood stores so ubiquitous here, differ in the variety of products they carry with some shops only a small room with milk, eggs, bread, candy and tortillas. Others, such as our local pulperia, have a wide range of products, including medicines, wine and beer, frozen chicken, dog food, paper products and even garden supplies all at very competitive prices, which saves us many trips into town.

Still, even at the larger supermarkets such as AutoMercado, Pali or Mas x Menos found in larger cities, many items easily purchased in the United States are unheard of. One example that came as a surprise to me was tomatillos, those small green, husked tomato-like fruits used in many Mexican foods and critical to my “famous” Chili Verde. After asking at numerous stores and getting only puzzled frowns, I finally concluded that Ticos simply don’t grow or use tomatillos. We have also found that jalapeno peppers are seasonal here. Right now there is sufficient rainfall for them to grow so they are easily had at the weekly feria, or farmers’ market. But come the dry season next January and February, they will be unavailable.

The feria stands out as the best place to buy fresh fruits and vegetables but pesticides are so widely used in Costa Rica that if you want organic or simply “clean” produce, you have to search around. Some communities – often with a large Gringo population to create demand – have developed reliable sources for such produce. Here in Atenas, we are fortunate to have such a supply, thanks to a charming French woman and her husband who put together baskets of organic products each week. We understand there is a large organic feria in San Isidro del General on the Pacific slope and an organic agricultural cooperative in the Turrialba area on the Caribbean slope. There are also numerous organic farms, some set up as “conscious communities,” such as Fuente Verde, Finca Las Brisas and Rancho Margot, to name a few of those listed at Intentional Conscious Communities of Costa Rica

All in all, the real challenge in food shopping in Costa Rica is in learning to use what is readily available, rather than demanding products that are expensive imports or just not here. And with the fabulous array of fruits and vegetables that are available, plus most any meat you want, the only problem is deciding what to eat this week!

46 Sports Now Have their Health Protocols in Costa Rica