A group of 16 diplomats from the Foreign Ministry alter the order for an adequate process of rotation and promotion within the Costa Rican diplomatic career, by refusing to leave the country to provide their services abroad despite the fact that this is stipulated by law.

It is a group of 5 ambassadors, 4 advisory ministers, 2 councilors, 3 first secretaries and 2 third secretaries, according to a report prepared by the Ministry of Foreign Affairs, at our request.

The diplomatic career of the Foreign Ministry must serve in the Chancellery for 2 years and then rotate in some diplomatic headquarters around the world for a period of 4 years. This is established by the Law of the Statute of the Foreign Service of the Republic and its respective regulations. 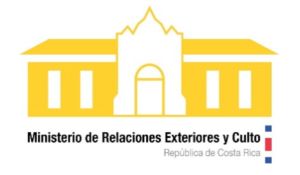 “When a 4th, 5th, 6th or 7th officer has completed 4 years of continuous service abroad, he /she must return to the Foreign Ministry to perform a position in the Internal Service corresponding to his/her rank, for a minimum period of 2 years, during which he/she will not be able to return to exercise office abroad, unless there is a lack of career officials of his/her category to fill a vacancy …”, says Article 22 of the mentioned law.

When the diplomats were opposed to complying with this regulation, they entered the ideal path of the rest of the rotations and hindered the promotion of members of their own union within the diplomatic career. For example, in his almost 14 years of service, the 1st Secretary Cyrus Alpízar Barquero has never served in any other country.

Even this official in these 14 years has held positions illegally; the most recent being the alternate director of Protocol and Ceremonial of the State. In this position, he had to resign when the Attorney General of the Republic confirmed the illegality of several appointments made in this and the last administration because the officials who held the positions did not have the rank of ambassadors.

Other cases that stand out are those of the ambassadors Jorge Sáenz Carbonell and Carmen Claramunt, who are 15 and 13 years old, respectively, of having stayed in the Foreign Ministry. Recently both officials were appointed by the chancellor, Manuel Ventura, as the directors of the Manuel María Peralta Diplomatic Institute.

In his recent pronouncement on December 7th, 2018, -which established the illegal appointments of former Foreign Minister Epsy Campbell- the Attorney General’s Office recalled this obligation on the part of diplomats.

“One of the particularities of the diplomatic career, imposes the rotation or the transfer of the career server in the various functions that make up the so-called Foreign Service (Articles 1, 7, 8, and 19); this is under the principle of alternation that career officials provide their services abroad and in the internal plant of the Ministry, as appropriate to the regulated equalization of the categories of the ladder that has been legally established (Article 9). Which constitutes a regulated element of his appointment”, said the procuring entity.