“Return for wildlife” is achieved by the World Environment Day 2016 and was launched by the United Nations. This increased the amount of people in the fight against the trade in wild fauna and flora in order to protect the planet’s biodiversity.

This year seeks to mobilize the world to stop the illegal trade in wild fauna and flora. 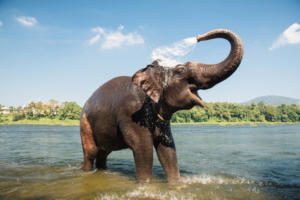 , but that everyone works together to put a stop to this type of business.

This effort is aimed at informing consumers about the harm that is generated from buying animals that are not supposed to be pets as well as products that harm the species. The UN hopes to stimulate awareness in the population and in the environmental problems that affect the planet in order to create change to achieve more friendly habits where we live.

Every June 5th World Environment Day is celebrated, a date designated by the United Nations General Assembly to commemorate the opening day of the first major conference on international environmental issues that was held in Stockholm in 1972.

The theme of this year “Return for Wildlife” (Go Wild for Life) promotes the dissemination of the crimes committed against nature and wildlife, and the need to carry out actions to avoid it.

The theme is the fight against illegal trade in wild fauna and flora and illegal wildlife trafficking, a devastating biodiversity activity that endangers the survival of many species around our planet.

UN against trafficking of species

Every year the goal is to raise awareness of the role that each person has on the environment and to do something to change the facts. In this case, it is to curb demand for products derived from wildlife. The central axis promotes action to ensure that policies and economic models are carried out and that this slogan is implemented.

Illegal trade in wild animals and plants has dimensions only surpassed by other illegal businesses such as drugs and war materials, and uses similar distribution channels and development, both in its conception and execution.

This type of illegal is motivated by quick profits, and is most serious for species such as primates, cats, birds, reptiles, orchids, cactus, among many others that are in danger.

The role of industries

Cosmetic, pharmaceutical and fashion industries involve thousands of animals and plants in their research processes or in the development of their products.

Fashion has contributed for decades to the indiscriminate use of animal fur to make coats, shoes, handbags, belts, wallets, etc, which generated a great impact on wildlife.

Currently it is being increasingly emphasized because of the use of synthetic skins directly or for nonuse. The UN wishes to end the killing of millions of animals used to create clothing or cosmetics.

Why is there a need to take care of wildlife?

UN stresses that it is necessary to understand that species are not isolated, but live linked together, forming ecosystems that depend on lives in a way of which we are unaware. Each of these species being attacked by illegal trade represents a masterpiece of evolution of thousands or millions of years.

So this year they seek to mobilize the world to say stop to the illegal trade of wild fauna and flora. And it is hoped not only that countries and governments take appropriate measures to combat illegal trafficking measures, but that all people from all places work together to put a stop to this type of business. You can inform consumers about the harm that is generated in order to avoid buying animals that are not pets or products that harm the species.
At this time the use of social networks is one of the best places to spread highlights and news about the consequences of illegal trafficking of animals and plants.