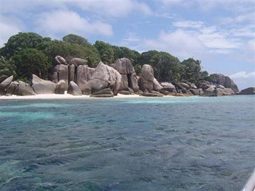 Two new species of transparent mini-shrimp were discovered by scientists at the University of Costa Rica (UCR) in the waters off Cocos Island, 532 km from Puntarenas.

These microscopic organisms-only 1.5 millimeters long, are at the base of the food chain of marine ecosystems. Both belong to a subclass of animals called copepods.

Alvaro Morales, the Center for Research in Marine Sciences and Limnology (Cimar) at UCR, said: “Copepods are microscopic but vital in the ocean.”

The specialist explained that the larvae of commercially important species such as sardines, snappers and sea bass, and echinoderms-starfish-and even whales feed on copepods. “Without them, the oceans would be sick”.

The first discovered species of shrimp was called Symbazoma Cocoense . This crustacean measures just 1.4 mm long (similar to the thickness of a coin) and at its widest part measures 0.3 millimeters. “It’s a reef mini0shrimp rather elongated with two short antennae,” explained Morales, who studied females of this species in the CIMAR.

The species Cymbasoma cocoense is also characterized by having a carapace. This means that the chest and head are fused into one piece, that’s where you put the two eyes.

Having two eyes appears to be a novelty, but in fact it is because it is not common in this subclass. “There are many individuals of these species that have no eyes or have only one of them,” said the UCR specialist.

The carapace is also where the legs are attached. These tips are those that give the appearance of shrimp, such as those commonly known.

The second species that was discovered was Monstrillopsis . Only adult male animals were analyzed. “This the first time that this genus of marine animals (Monstrillopsis) has been recorded in the country,” concluded the researcher.

The animal is even smaller than the one described above, but it has long antennae. It measures 1.4 millimeters in length and about 0.2 millimeters at its widest part. “This species is less transparent or translucent than the other, which could be associated with different habits of life among them,” said Morales.

According to the biologist, this is likely to be because the coral colony inhabited by the species is darker, which means the animal needs to “get” darker to blend with the environment and at least make it difficult for attacks on their predators.

Experts estimate that the life cycle of both animals and copepods is very short and lasts, at most, about 30 days.

Translation and editing by TCRN Staff