Throughout history, one of the oldest expressions of the human being has been the theater. From prehistoric times, the man understood the importance of communication with a social purpose, already in the era of the caverns mimic rituals were performed representing scenes of hunts and fights. With the development of human society, these theatrical expressions were also gaining new characteristics, refining and developing more and more. In Africa ancestral tribes religious rites mixed movement and gestural communication with music and dance, wearing objects such as masks, which served to express roles or moods. Already in ancient times, these rites reinforced the identity and social cohesion.

In the evolution of human history, the theater can be seen omnipresent, interpreting historical events and conserving them in works that have lasted for centuries. In the theater, the social, cultural, religious and political changes of history are documented, telling through real or fictitious characters the reality of the world through metaphors and allegories. 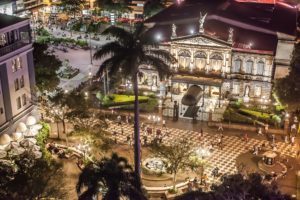 The theater in Costa Rica is an expression of the national culture that has been developing formally over the last hundred years. The 1st manifestations of this art were based on religious tradition and stories of the history of the country, and then developed into topics of the most varied such as social and political criticism, classical theater, satire, comedy and Variety Theater.

Although Costa Rican natives already had a culture and religious traditions that involved rituals and very theatrical acts, with the Spanish colonization, began to be seen in the country a kind of religious theater devised by priests as an evangelizing tool. After independence in 1821, some international theatrical companies arrive in the country. At that time there were still no buildings formally built to make the staging, so it was resorted to doing so in galleys.

It was not until the year of 1846 when mister Sifuentes built a wood-roofed theater-room, where 200 people could sit located in San José. In 1850 the 1st well-organized theater company arrived a Spanish company, which for three months presented its show in this place called Teatro Sifuentes. In 1850, with the rise of President Juan Rafael Mora Porras, San José underwent a process of modernization and reorganization that included, among other changes, the construction of the first proper theater. Mora Theater was inaugurated in December 1850 and had a pallet with the shape of a horseshoe, two rows of boxes, a section of seats, large galleries and comfortable stage.

With the fall of Mora in 1860, the theater was renamed as the Municipal Theater until its destruction by an earthquake in 1888.In 1890, a Spanish businessman named Tomás García began the construction of a theater to replace the Municipal Theater. A year later, in 1891, the Variety Theater was inaugurated, whose cultural importance in the development of the Costa Rican society persists up to the present, since it allowed the constant presence of theater companies and other artistic societies.

The construction of the National Theater

During the administration of President José Joaquín Rodríguez, after decades of trying to open a suitable place to present high-level national and international art shows, Decree No.XXXIII of May 28th, 1890, was issued with the decision to build and emblematic National Theater building. For the collection of necessary funds for the construction of the theater, a plan of taxes on the export of coffee was created, which was later replaced with a new one on the imported general merchandise, charging one cent per kilogram of merchandise. In this way, the construction of the National Theater was completed.

The National Theater presents a neo-classical Renaissance architecture, with marbles brought from Carara, Italy and decorated with scenes from the coffee harvest. In the building, you can perceive varied styles, its Pompeian interiors, with the Baroque and Rococo interior decoration of the 2nd hall, and the metal dome made in Belgium. All the stone walls were erected by expert Costa Rican teachers.

This theater facade is crowned by the famous sculptures of Pietro Bulgarelli, dance, fame, and music. Among many works of art stand out the sculptures that present the Spanish playwright Calderón de la Barca and the German composer Ludwig Van Beethoven, made by the Italian artist Adriático Froli. In the lobby, the floor and the columns are made of marble, where the sculpture “Los Héroes de la Miseria” by Costa Rican artist Juan Ramón Bonilla is located. The inauguration of the Theater was on October 21st, 1897, with the opera of Faust, by Charles Gounod, performed by the French company Aubry.

Symbol of the culture and history of the nation

On February 5th, the National Theater, declared a National Monument in 1965, received a second tribute when it was declared “National Symbol of Historical-Architectural Heritage and Cultural Freedom”. This decision was taken after Bill 20,560 was approved, which entered the legislative trend in October of last year and was unanimously approved this month.

This new title for the National Theater will contribute to maintain and nurture the collective memory of the Central American nation, to strengthen the appropriation of this temple of art as the home of all ticos and to defend the presence of different cultural manifestations in Costa Rican diversity; as well as the preservation of the historical architectural heritage and the safeguarding of the intangible cultural heritage it contains.