The Fall of the American-Arab Wall 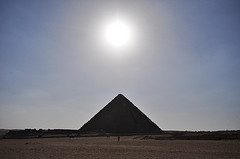 Amongst many remarkable things about the mass protests in the Arab world, two are most remarkable from a spiritual perspective. The first is the aliveness and passion of the Arab people; the second is their spontaneous eruption of fearlessness.

Ironies abound. Here in America, the ‘the land of the free,’ the people are moribund and afraid. That’s why most Americans feel no relationship to events in the Arab world. And our leaders, including President Obama, worry about whether America’s false security and stability, not to mention oil supply, will be disrupted. The contrast could not be more poignant.

Obama’s transformational rhetoric has been seized and acted upon—but in the Arab world! The change candidate that turned out to be a status quo president is presiding over popular upheavals in the Empire’s most precious puppet regimes. Never think God doesn’t have a sense of humor!

Of course, many questions remain. The overarching question, to my mind, is this. Is something new happening in the Arab world, or are people just pursuing the same old pattern of personal and development dreams in the individualistic and nationalistic mode?

A young woman, her head tightly covered in black, sweeps a street in Cairo after looters broke into a row of shops. Asked who is paying her to do clean-up work, she reacts with dismay, indignantly replying, “No one pays me.” Asked why she is doing it then, she seems almost perplexed, responding, “No reason…this is my country.”

Are we witnessing the creation of new Egyptian and Tunisian nations, or are we witnessing, and potentially participating in the beginning of a new global configuration?

No doubt a nationalist fervor has been released in the Arab world. But driving it is the demand by people for self-determination and decent, non-repressive societies that offer opportunities rather than stagnation. They see the material life the people in the West have, and see no reason why they can’t have a society that offers them a good life as well. That natural drive can be congruent with building a global compact based on cooperation.

As far as my own country, this marks the historical point at which the United States can no longer continue to have it both ways in the Arab world (and the world generally). No longer can we promote ‘universal’ democratic values  rhetorically, while at the same time propping up client-state tyrants that serve our own interests.

No, the halls of power in the Empire aren’t sleeping soundly these nights. Hosni Mubarak, a corrupt, recalcitrant puppet of the USA to the tune of a billion and a half military dollars a year, will not be able to stem the tide of revolt against his repressive regime. And the USA fears an even greater contagion effect. But America needs to get on the right side of history, and tell Mubarak to go, now.

Whether Arab versions of popular democracy sprout forth this spring, or Islamist extremists, who have waited in the wings for so long, step into the vacuum, American influence in the Middle East is rapidly waning. America can either begin acting in accordance with our core principles, and affect positive outcomes, or keep going the way we’ve been going, and feed Islamic extremism.

It’s important to remember that Egypt is not just part of the Middle East; it’s part of the African continent. Most people in the United States don’t think of Egypt as part of Africa, except perhaps peripherally.

Sometimes I wonder if Africans themselves view Egypt and the Arab countries along the Mediterranean that way. Be that as it may, the fact is that Egypt is Africa’s northern cornerstone, as South Africa is its southern one, and Nigeria its western and Kenya its eastern cornerstones. Will this tectonic shift in the world’s political configuration stir other African peoples to rise up and take back their nations and destinies?

Only if Africans demand true self-determination, as the Tunisian and Egyptian people are. Only then can all Africans finally throw off the yoke of colonialism, which has been replicated by their own leaders.

“We knew that tyrants were weak,” said a Tunisian protester, “but we didn’t know they were this weak.”

After at the beginning of December 2021 the deputies of the factions of the Christian Social Unity (PUSC), National...
Environment

Costa Rica: The Happiest Country in the World and the Best to Rest in 2022!