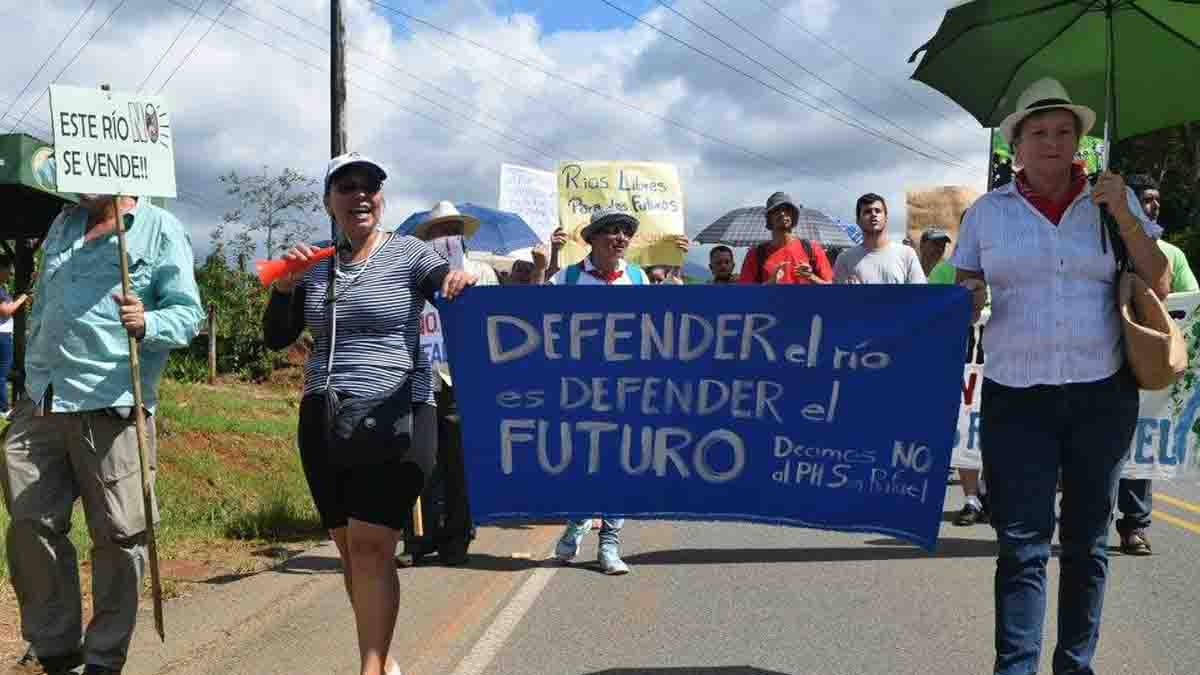 The fight for the defense of the San Rafael river at San Pedro de Pérez Zeledón in the Southern Zone has been going on for six and a half years against the private hydroelectric projects that were proposed in the main southern rivers between 2013 to 2015.

In the communities surrounding the San Rafael river, as previously occurred in the Chirripó Pacífico, Peñas Blancas, San Pedro, Convento, Sonador, Volcán, Angel, Cañas and Canasta rivers, a popular commission of local people from communities and social organizations have been formed.

These communal groups were characterized by having a horizontal hierarchical structure in decision-making, inclusive in terms of participation by gender, children, youth, older adults, and without distinction of social class, religion, or political party, the important thing was to share the vision to support the fight for our water resources.

This particular local group called the “Pro Rescue Commission of the San Rafael River”, received great support at the regional and national levels. Many other groups showed solidarity and supported actions to put pressure on the authorities and finally get the Environment Minister to reject the last of the permits that the company needed to start construction works.

At the regional level, the proliferation of hydroelectric plants is part of the Mesoamerica Project, a geostrategic project of the United States, of direct interest to them, in the current global context of resource depletion, and its efforts to maintain itself as the hegemonic power worldwide.

They are part of the Mesoamerica Project, the Central American Electrical Interconnection System (Siecap), which in turn connects with Mexico and to the south with Colombia; This initiative also includes a wide network of highways, ports and pipelines, as well as the Mesoamerican Biological Corridor, all to facilitate the exploitation and “looting” of the Mesoamerican space rich in water, minerals, promote agribusiness and exploit biodiversity.

During the last years, the rejection of the San Rafael Hydroelectric Project (PHSR), was evident, even so, the company continued arguing and minimizing the environmental and social impacts, exaggerating the benefits for the communities and generally promoting its project as a synonym of progress and local development; on the other hand, the state institutions, the Municipality of Pérez Zeledón, Setena, Water Directorate, Aresep, went one by one granting permits despite the report of dozens of irregularities in the project.

During the almost seven years of this socio-environmental conflict, the presence of the company and its project, caused a division and conflicts between neighbors, friends and families.

This also registered violent acts. If the conflict continued, more violence and even deaths would have been possible, as happened to Sergio Rojas in the nearby town of Salitre; Another possible scenario would have been greater police repression and arrests of opponents to the project, since in the country, the police forces receive military training in the infamous School of the Americas2 (WHINSEC in Fort BenningUS) and also in Colombia, Carabineros de Chile and Israel .

The role of communities and environmental activists was essential to stop the PHSR, despite the threat of the rivers to the south, it is still present in the Coto Brus canton, where ICE plans to carry out five hydroelectric projects.

In addition, some of the projects stopped between 2013 and 2019 have proven to be obnoxious persistent and still being considered by economic groups, such as the cases of PH Gran Boruca, PH Diquís, or PH Los Gemelos, which emerged with the name of PH Hidrosur.