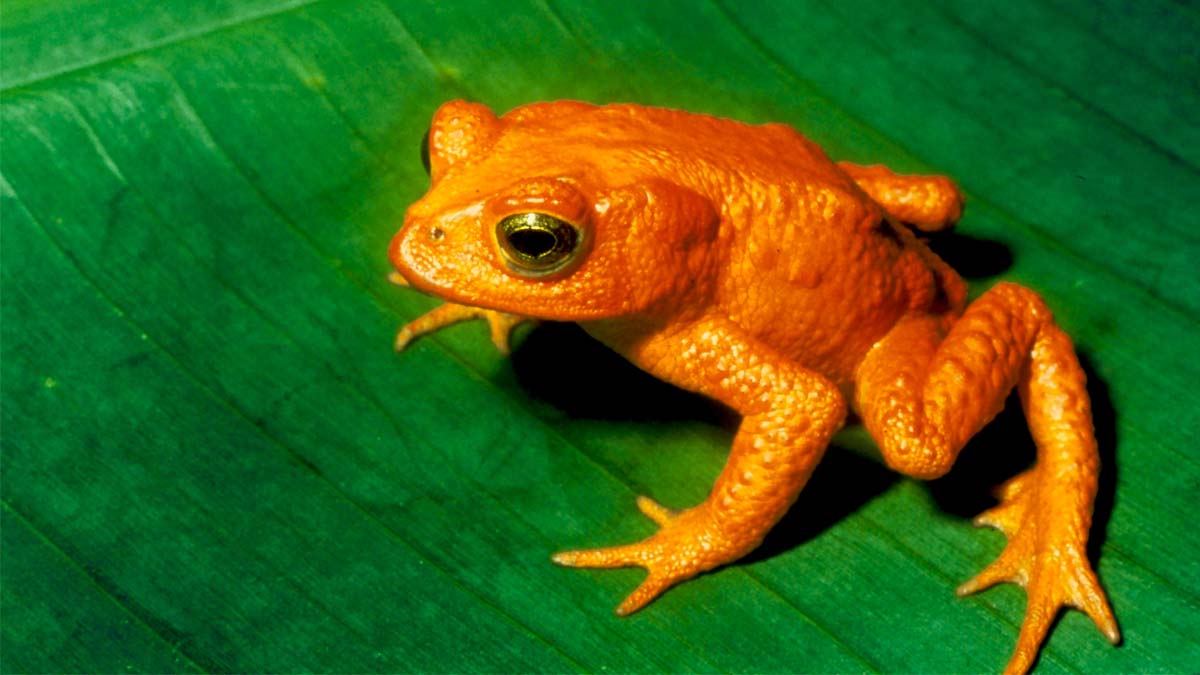 The golden toad of Monteverde toad (Incilius perigones) was a species of anuran amphibians that lived in a few places in the Monteverde forest, in Costa Rica, in Central America. It is classified by IUCN as extinct since, since 1989, not a single specimen has been seen.

This brilliant coloration made the species a great ambassador for Costa Rica, frequently appearing in promotional materials touting the country’s rich biodiversity.

Biology of the Golden Toad

The golden toad was one of more than 40 species in the genus Incilius of the Bufonidae family.

It was created in 1972 mainly to protect the habitat of the Monteverde golden toad.
Although this action seems important to ensure the species, it was not enough.
In 1989 not a single golden toad was found anywhere in the world and the IUCN classified this species of amphibian as extinct.

Very little is known about their behavior: it is believed that they lived underground since they could not be observed for most of the year. On the contrary, their presence was very obvious during their mating season, which lasted about a week, in April, after the dry season, when the forest becomes more humid, the males gathered in puddles in large numbers at waiting for the females.

On April 15, 1987, Crump noted in his field diary that he had counted a total of 133 toads mating in a “kitchen-sized sink.” Five days later, Crump testified that the sinks in the area were drying up, which he attributed to the El Niño effects, “leaving desiccated eggs covered in mold.” The toads tried to mate again in May. Of the 43,500 eggs Crump found, only 29 tadpoles survived drying of the forest floor.

Over the two decades following their discovery, the golden toads thrived in a 12-square-kilometer area near Monteverde. Until the summer of 1987, ecologists recorded sightings of more than 1,500 adult toads in three months.

Within two years, however, the species disappeared entirely, and no living specimen has been seen since May 15, 1989. After years of searching, the International Union for Conservation of Nature declared the extinct golden toad.

This information has helped many conservationists initiate new efforts to protect the world’s remaining frogs and toad species from extinction. Zoos around the world have launched capture programs to help protect animals from the rapid fluctuations of natural conditions, giving them a chance to survive some of the same threats that may have killed the golden toad.

Caution for Other Species

Other reasons for the decline in amphibian species include overexploitation, pollution, pesticides, acid rain, ultraviolet radiation, and climate change. Deforestation and global warming is generally responsible for the bewildering disappearance of these toads but is rather a combination of many destructive forces that killed this species.