The artist performed songs from his new album, 57th & 9th, and also made some of the biggest hits of his work with The Police and his solo career. 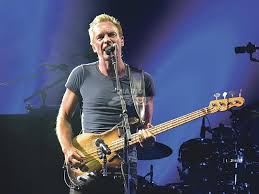 Because not only successes an artist lives is that the British Sting arrives in Costa Rica to perform this past Tuesday with a suitcase loaded with surprises and new music.

The show was at the Estadio Nacional, in La Sabana, and was part of the international tour called 57th & 9th Tour, with which he touted his most recent musical production. In this, his fourth visit to Costa Rican soil, the musician, and composer did not leave out his most recent work.

According to the press manager of the production company SD Concerts, responsible for the editing of Sting in the National, there was also an opportunity to chant his most famous songs, both his stage with The Police and his solo work.

“Musically it was a spectacle full of surprises; The concert was very open to content level, thanks to Sting’s extensive career, so it’s sure no one was disappointed, “said Juan José Rojas, SD press.

Together with Sting, a team of 32 people, including musicians, assistants, and chorus players, arrives in the country.

Noteworthy is the presence of Joe Sumner, Sting’s eldest son, in the recital. The eldest son participated actively in the show and could share the microphone with his father at different moments of the show.

In addition, during the international tour, the legendary British musician has also called the young band The Last Bandoleros, which offers an entertaining proposal of mergers of rock and roll and tex-mex.

In the development of the presentation, Sting himself plays or participates in pieces with The Last Bandoleros and with his son. There were many surprises, “added Rojas.
The album 57th & 9th is the number 12 production of the solo artist’s career; Premiered it in November 2016. His name refers to the streets that the artist must walk across when walking to the recording studio in New York.

This proposal stands out, according to the producer of the album, for being the rockiest Sting since publishing Synchronicity (1983, with The Police).

The Costa Rican opening act for this international concert is the experienced singer Pato Barraza. “I am very honored by the invitation to be on the same stage as someone I admire for so many years. On the other hand, I am surprised; I heard the news on Thursday. I’m going to make a solo proposal, which is what they need for technical situations, so I’m going with a looper style show, which allows me to do more things than I do with the guitar, “confirmed Barraza, who has already three decades of experience.

Sting was scheduled to arrive in Costa Rica this Sunday, from Brazil, where he made his show. The artist left the country on Wednesday.

As in any public spectacle, umbrellas with metal tips, firearms, video cameras or professional photographs, food, and beverages were not allowed. Inside the premises, here were meals and other common facilities in these activities.