Special Report – A Highway Through the Serengeti!

The word Serengeti is synonymous with Africa. The Serengeti’s spectacular panoply of predator and prey still echoes through the mists of history on the continent of humankind’s birth. 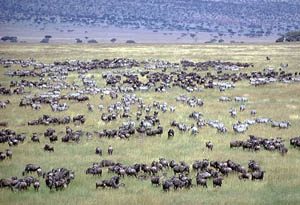 Now, the Tanzanian government has approved a highway that will bisect the shrinking expanse of Serengeti National Park, ending the last great migrations on earth.

Early settlers stood in awe as they waited for hours in their wagon trains as miles of massive buffalo passed by on the American plains. The wanton destruction of the buffalo in America was both the coffin and the nails for many Native American peoples in the 19th century.

A sub-current of shame runs through the American body politic for what greedy European immigrants, in their lust for land, power, and money, did to the peoples and animals that lived on this continent before they arrived.

As Europeans decimated America, they turned to Africa, first enslaving millions, and then shackling the continent with colonialist exploitation.

It’s heart rendering to see the Tanzanian government ready to repeat the same pattern of devastation. Will Africa’s resources be tamed and extracted until what makes it Africa is gone? Will future generations of Africans also feel shame for what is being done today in the name of ‘development?’

The thoughtful and strong, and usually mild and compliant Tanzanian people oppose the idiocy of a highway across the Serengeti. Can they, along with people around the world who still feel the fading heartbeat of the earth, raise voices in unison against this plan?

Mass migrations of huge herds of animals were once common on every continent. Africa’s great migrations are the last on earth. Wildebeest and zebras, numbering a million and a half, flood into Kenya’s Maasai Mara from Tanzania’s Serengeti National Park.

In nature’s way, lions, cheetahs, hyenas, and other predators pick off the weak and stragglers in the herds. Then, after a 2000-kilometer journey to southern Kenya, the Maasai Mara teems with fantastic concentrations of wildlife.

The approved highway cuts right across the northern path of the migrating wildebeest and other herds at a time when they are most vulnerable. But the Tanzanian government argues that the highway is essential for the development of the impoverished region, linking the Indian Ocean port of Dar es Salaam with Musoma and Mwanza on Lake Victoria.

One of the world’s foremost conservationists, the Kenyan-born Richard Leakey, who was appointed the head of the Wildlife Conservation and Management Department by President Daniel Arap Moi in the ‘90’s, says that the highway is “obviously of critical national interest to the Tanzanians.”

Then, contradictorily and tepidly, Leakey says that “preserving one of the last great spectacles on the planet, a planet that used to have far more of this but all of which has been destroyed by humanity except this one, is something we should save.”

Tanzanians themselves are clearer on the Serengeti stupidity. As Angelus Mamba in Arusha said, “We have reached a very serious stage if the country even thinks of constructing a highway that will cut through Serengeti National park. In short the idea is about killing thousands of wildlife species in exchange for a road whose commercial value isn’t even that significant.”

This issue goes to the heart of the relationship between humans and nature. It’s not about wildebeest and zebra migrations, but about humankind’s place on earth for the foreseeable future, the earth from which we came and upon which we depend for our very existence.

Certainly people in Africa have the right to survive and prosper, and the West has no right to say what Tanzanians should do with their land after all the damage the industrialized world has wreaked upon the planet.

But like it or not, all people live in a global society now, and momentous decisions like the annihilation of the Serengeti do not belong to one government alone.

How do we, as human beings, provide development and reduce the gross disparities in wealth, without obliterating what is left of the earth’s diversity and splendor? Certainly following the West’s model of ‘development’ is not the way for impoverished people to prosper, live in dignity, and contribute to the future of humanity.

The questions of human progress and natural diversity are intertwined more tightly around the Serengeti, both spiritually and geographically, than anywhere on earth.

We, the living generations, must respond. Not as Tanzanians or Americans or whatever, but as human beings, facing the same crisis of consciousness everywhere.

The current year is a "common year" beginning on a Friday in the Gregorian calendar. It is also known with the number 2021 Anno...
Read more

Unanimously, the Legislative Assembly's Special Permanent Commission on Security and Drug Trafficking affirmatively ruled a bill that seeks to prohibit naturalization for foreigners with...
Read more

Political Monsters Are Not Embodied In Words; They Are Embodied in People: Trump and The Civil Protests

Donald Trump's speech is not what is really executing minorities or differentiated groups in the United States, but rather, it is his actions or...
Read more

Are you tired of cleaning the floor every day? Do you wish there are ways to clean it faster to give you free time...
Read more
- Advertisement -