Sea turtles have inhabited the earth for more than 100 million years, and in their long history on our beautiful planet, they have managed to survive various climate changes such as glaciations. Despite having overcome all this, today by actions caused by the same man, are in danger of disappearing. The reproduction of the turtles in itself complicated because it is assumed that out of every 1,000 turtles that are born only one will reach the mature age, and this process of growth depending on the species may last between 10 and 15 years.

All sea turtles are on the Red List of Endangered Species of the World Conservation Union, and in Appendix I (maximum protection) of the Convention on International Trade in Endangered Species of Wild Fauna and Flora, known as CITES, where the trade in sea turtles, as well as their parts, is prohibited internationally, as a measure of protection to their populations, including all articles of hawksbill.

In Costa Rica, thanks to its magnificent coasts of the Pacific Ocean and the Caribbean Sea, you can observe 5 of the 7 species of sea turtles that inhabit the world: the Lora, Baula, Carey, Verde and Cabezona tortoises. This represents an enormous privilege at the level of biological diversity for the country, thus being able to contribute to the preservation of these species. Almost any time of the year you can see sea turtles nesting on the beaches of Costa Rica or baby turtles running in the sand, as fast as possible, to reach the sea. 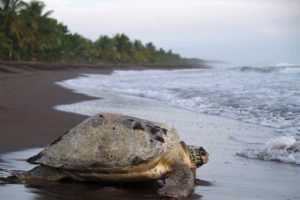 Where you can see turtles in Costa Rica

Excursions to see the nesting and birth of sea turtles are an incomparable experience in Costa Rica, which obeys a cycle of nature that has occurred for centuries.

The most famous place to observe sea turtles in Costa Rica is the Tortuguero National Park, in the north of the Caribbean coast. Tortuguero is the most important nesting site of the green turtle (Chelonia Midas) in the Western Hemisphere, whose species is in danger of extinction. It is also a very important nesting site for the critically endangered species of hawksbill turtles (Eretmochelys Imbricata); boba, also known as cabezona or loggerhead (Caretta Caretta) and leatherback (Dermochelys Coriacea). The Sea Turtle Conservation organization has worked in Tortuguero since 1959 to save sea turtles.

Further south, on the Caribbean coast of Costa Rica, in the Gandoca-Manzanillo Marine and Wildlife Refuge, we can also see nesting hawksbill, leatherback and leatherback turtles.

In the Costa Rican Pacific coast, we can observe, making their nests, the giant leatherback turtles, in the Las Baulas National Park, in Playa Grande. This is the largest sea turtle that currently exists and is one of the largest reptiles in the world. It takes its name from the leathery carapace that it has, with deep grooves, that distinguish it from the shell that other turtles have. 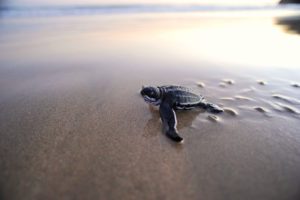 The amazing phenomenon of massive arrivals of hundreds of thousands of Kemp’s ridleys (Lepidochelys olivacea), all arriving at the same time to lay their eggs in the Ostional National Wildlife Refuge, is one of the most spectacular natural events in the world. This protected beach in the Nicoya Peninsula can be covered by thousands and thousands of these sea turtles during their enormous “arrivals” (arrivals), which makes Ostional the second largest nesting site for Kemp’s ridleys in the world, where leatherback and green turtles also arrive.

A little further south of Ostional, on the Nicoya Peninsula, the little-visited Camaronal Beach, near Sámara, is also a nesting site for Kemp’s ridleys, Leatherback and Hawksbill turtles.

You can also dive with turtles

The underwater volcanic rock formations and pinnacles on the coasts of Costa Rica are home to small hard corals, sponges, and gorgonians. In addition, large pelagic animals can often be seen. Although the Caribbean coast has yet to develop a better infrastructure for sports diving, diving on the Pacific coast is spectacular. The southern area is a protected biological reserve and offers the opportunity to see rays, white tip reef sharks and of course turtles. 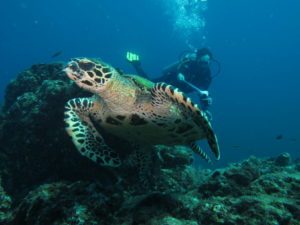 There is a great variety of tours that can take you to different destinations especially to look for turtles, these majestic animals, of calm behavior, will be even more beautiful under the water where their heavy and big bodies will move with grace and delicacy.

Several non-profit organizations in Costa Rica, such as Save the Inc turtles and ASTOP (Asociación Salvemos Las Tortugas de Parismina) are dedicated to the protection of endangered marine turtles and their habitats. Through the development of community education and awareness programs conservation projects based on which have been able to inspire the active participation of locals, as well as the global community. These organizations also offer financial assistance to Caribbean coastal communities. Financial aid helps sustainable methods that are environmentally responsible and help improve people’s lives as well.

The main environmental organizations such as the World Surveillance, the Ocean Conservancy and the WWF are promoting important conservation programs for the protection of the population of marine turtles in danger of extinction. These projects allow volunteers to participate in various activities such as patrolling beaches at night and general maintenance of nesting sites. Conservation programs have helped save thousands of sea turtles, their eggs, and hatchlings throughout Costa Rica.