Who Will You Meet in the Rainforest? Part 4: Amphibians

Exercising Is Not Enough: “You Cannot Be Fat but Healthy

So far we’ve seen mammals, birds, and reptiles, but the humidity and near-constant rain of most Costa Rican forests are the ideal habitat for yet another class of animals: amphibians. Not to be confused with reptiles like lizards and snakes, the most common amphibians in the rainforest are frogs and toads, although toads are merely a type of frog with drier skin better able to retain moisture. Frogs have smooth wet skin that requires them to stay close to water. 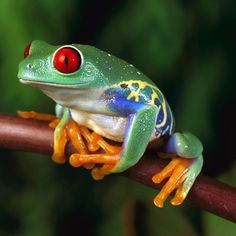 A couple species of frog are regularly featured in tourist literature, but the chances of glimpsing one in the rainforest are either slim or impossible. For example, the red-eyed tree frog, whose curious eyes and glittering skin seem to embody the wonder and beauty of the rainforest, is rarely spotted. They descend from the upper levels of the forest at the height of the rainy season in March and April, and with luck may be spotted at night by the ponds where they gather to mate.

Another often advertised species with a sad and mysterious story is the golden toad, the males a striking metallic orange unlike any other known frog. Discovered in 1964 within an extremely limited range in the forests of Monteverde, the toad’s population cataclysmically declined in 1988 when a single lonely male was spotted at a pond where the year before fifteen hundred had congregated. None have been spotted since 1989, and although many scientists speculate global climate change is to blame for their disappearance, no one is sure.

Despite the misleading usage of these two emblematic species, several amphibians can be more regularly encountered. The misty cloud forests of the highlands are an especially productive place to search for frogs, although many make their homes in the lowlands as well. Here are some of the most commonly encountered amphibians of Costa Rica. 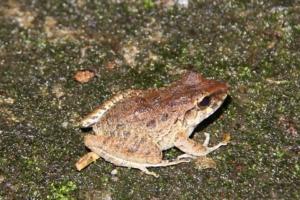 Found throughout the lowlands of Costa Rica’s Caribbean and Pacific coasts, the rain frog has a grainy appearance that helps conceal it from predators. A prominent gold stripe along the upper edge of its large eyes can help to identify the rain frog, along with the yellow spots that occur on the backside of its thighs. The rain frog typically hides in the leaf litter it so excellently blends into during the day and sings at night, where it can most easily be spotted as it rests on the leaves of low vegetation in the forest. 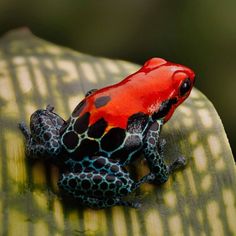 Their fame often preceding them, the poison dart frogs of Costa Rica can range from the military camouflage of the green and black poison dart frog to the red body and contrasting sapphire legs of the blue jeans poison dart frog, also called the strawberry poison dart frog. Their range varies from the Caribbean lowlands to the south Pacific depending on the species. The frogs’ obvious coloration is a warning to predators that they are highly venomous, and they can even be dangerous to humans if their skin comes in contact with a person’s mouth or an open wound. 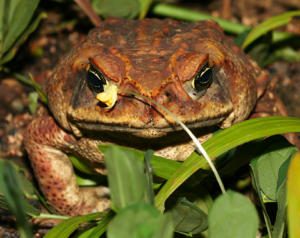 Although more a staple of gardens and other altered habitats, the bufo or giant toad is one of the most commonly sighted amphibians of Costa Rica. It is enormous, and eats just about anything it can fit inside itself, including insects, spiders, small mammals, and other toads. Bufo toads are poisonous, and dogs that eat or attack these large animals may be killed. The toad is especially prolific around human altered habitats, and is widely regarded as a pest. 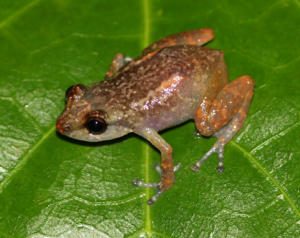 More often heard than seen, the dink or tink frog is not much larger than a fingernail. The frog is named after its one-note call that it repeatedly utters throughout the tropical night. The call resembles the sound of a small hammer striking a metal surface. The repetitive chorus of the dink frog is one of the most recognizable notes of the Costa Rican night. 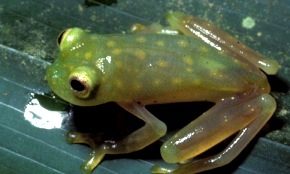 The glass frog is perhaps the most fascinating of all Costa Rican amphibians. A couple different species make their home in Costa Rica, although glass frogs range from southern Mexico to northern Argentina. Anyone lucky enough to closely observe a glass frog along the lowland streams where they hide may be able to see the distinctive feature that gives glass frogs their name. Their pale green skin is translucent, and an observer can actually see the background where a frog is standing through its body, along with its miniscule organs. This remarkable quality makes the frog especially well camouflaged, and one of the most memorable characters of Costa Rican forests.

Costa Rican amphibians are rarely seen during the day, when they typically conceal themselves in bromeliads in the canopy, leaf litter, or pools and streams. It’s easiest to find amphibians by listening to them at night, and following their songs. Those able to track down a singing frog may be amazed at how tiny and inconspicuous most frogs are, especially after contemplating how much their melodies shape our memory of the rainforest night.

Share
Facebook
Twitter
WhatsApp
Linkedin
Email
Previous articleWhat would Costa Rica be like if the Spaniards had not conquered?
Next articleUnited Biofuels of America: “We are developing the next big Costa Rican export”
- Advertisement -
- Advertisement -

In recent years, more and more people have been hearing about cannabidiol, also known as CBD, and its beneficial...
Health

Exercising Is Not Enough: “You Cannot Be Fat but Healthy

How CBD Is Produced and Why it is so Beneficial

Costa Rica Consolidates as a Destination for LGBTI+ Travelers