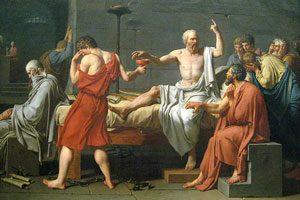 Perhaps the most difficult thing for people to do, no matter what their cultural background, is to question together. It’s strange that a natural action, which forms and forges the deepest and truest connection between human beings, is so rare.

Given the parlous state of our world, that shouldn’t be a surprise. But it still is perplexing, at least to me. Why is thinking together so uncommon and extraordinary?

No doubt a big part of it is that the fraying bonds of ethnicity, religion, and nation still have a strong hold on the human mind and heart. But perhaps the vast majority of people have also simply never experienced the intrinsic joy of enquiring, irrespective of personal or cultural background, with other human beings.

It would be foolish to think that one could convey in a few hundred words the essence of enquiry–that is, a shared intent to follow the thread of a mutual question to whatever insight it leads. But I would be remiss, to my own conscience at least, if I didn’t attempt to describe the process.

The first thing you have to have is curiosity about things that people usually accept, either because they’ve always been so, or out of the tired excuse that ‘it’s just human nature.’

Why is man the only species that systematically kills his own kind? Why are humans, who belong to this planet as much as any other species, wreaking havoc on the earth? Why are so many people hungry when a small minority has far more than they could ever use?

Some religions would have us believe that we’re made in the image of God. But God must be a very small and miserable thing if that’s true.

Despite what we’re doing to the earth and ourselves, I believe human beings have tremendous potential. That’s not an ideal, but something I’ve actually experienced. The thing that perplexes me is why there is so little drive for realizing our individual and collective potential.

Is it because the vast majority of people are inherently mediocre? Or is because we set our sights so low, conditioned by the impoverishment around us, whether physical or spiritual?

I feel questioning and igniting insight together is the way out of our collective morass. Because what does it matter if one or two, here and there, are able to liberate themselves from the chains society uses to bind us, and the anvil that the world pounds and drags us down with? How will that redound to the ordinary person?

To truly think together is the highest action that people can perform together. Indeed, following the music of a shared question is a greater thing than a symphony playing together.

Questioning together has similarities with any group of musicians playing any good music together, but enquiry is different in that there is no score. Questions and insights flow solely and completely out of the minds and hearts of a given group of people in the present.

In other words, context, in the usual sense of the word (the particularities of language, culture, and background) isn’t the predominant factor. The only ‘context’ is a question shared by people in the present.

And that points to another reason why thinking together is so rare (except to a limited degree in science, technology, and business of course). If you think that local and national contexts are primary, then you won’t be able to think together with anyone, even a person of the same language, culture, and background.

Someone might ask, aren’t you just talking about Socratic dialogue?

Questioning was certainly at the heart of Socrates approach, but he didn’t give emphasis to shared questions, much less the intent to awaken insight together. Socrates program, as far as I understand it, was primarily to expose error, not illuminate truth.

But that points to the ultimate reason so few people question things, alone or with others. For as Socrates said, “When we first start facing truth, the process may be frightening, and many people run back to their old lives.”

But as he also said, “Once you’ve tasted the truth, you won’t ever want to go back to being ignorant.”