Health was not a priority for 19th Century Costa Ricans. Our forefathers lived in unhealthy conditions, especially those who inhabited cities without sewage systems, underground aqueducts and efficient garbage collection systems. In the countryside, although without the problems derived from overcrowding, sanitary conditions were no better. Families lacked drinking water, latrines, cleaning products, and medical services. 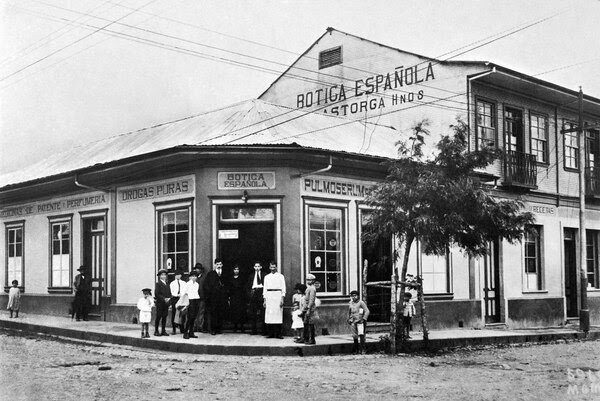 The mortality rate was extremely high and life expectancy was very low, due to a large number of diseases such as dysentery, diphtheria, malarial fevers, smallpox, STDs, etc.,  same that today have been eradicated or controlled.

Life in those times was hard. Families had to accept that premature death was something “normal”.  This behavior can be seen in the festive behavior of the “angel candles”, masterfully portrayed in the “Stories de Tata Mundo” by Fabián Dobles.

The 20th century brought about radical changes in the field of health. The political elites of the time, admirers of the culture of Western Europe and its political liberalism,  adopted the ideas proposed by the social hygiene movement.

These derived from the advances in medicine that had been happening since the mid-nineteenth century, especially the discoveries made in French microbiology by Louis Pasteur. Also from research that determined that some elements and chemical compounds had a bearing on the treatment of various diseases.

The social hygiene movement promoted by the liberal state was aimed at the working classes, as health workers were more productive. Thus public hospitals were created and numerous charitable organizations were dedicated to the dissemination of hygiene habits, nutrition, and maternal care.

The cities were sanitized through the construction of aqueducts and sewage networks. In short, a lot was invested in a significant improvement in the quality of life of the inhabitants of the cities. 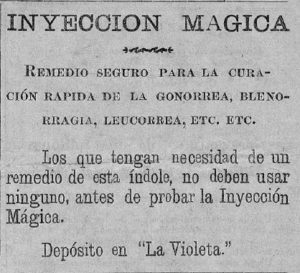 The renewed interest in health not only contributed to improving the hygiene habits of Costa Ricans, but it also fostered a nascent business; the pharmaceutical industry. This an important characteristic of the hygienist ideas was to prefer scientific medicines over the home remedies even then had predominated in the treatment of diseases.

The drugstores or “boticas”, as they were called then, proliferated in San José and the country’s main cities. They counted among their most avid clients the most affluent citizens of that hierarchical society. And with the birth of a new market, medication advertising began to be common, with numerous advertisements in the written press of the time. Many of them about products that, like the Scott Emulsion or Aspirin, are still recognized today. Many others would leave us stunned by the incredibleness of its content. Here’s a selection of advertisements that will surely astonish you and will get the occasional smile, but above all, it will give way to a reflection on the progress of pharmaceuticals and medicine in the last hundred years.

At the beginning of the 20th century, there was no regulation on the content of drug advertising. Ads offered little or no information about a medicine’s components, its real therapeutic qualities, and its possible side effects. In 1902, the La Violeta pharmacy, located in San José, promoted this mysterious “Magic Injection” as a “safe remedy for the quick healing”, that if we let ourselves be carried away by that double et cetera, of practically all venereal diseases,  But what did  such a miraculous injection contain and what was the reason for this obvious omission?

Most likely, the magic came from mercury cyanide, a dangerous compound obtained from the evaporation of mercury oxide in hydrocyanic acid. This cyanide had been in use since the 19th century for the treatment of venereal diseases. The substance was a dangerous poison, that when injected could have fatal consequences.

The pills were one of the most popular products of the first half of the 20th century. They were manufactured in the United States, and were so popular that, allegedly, they were being to falsified in Costa Rica, as this ad from 1929 warned; 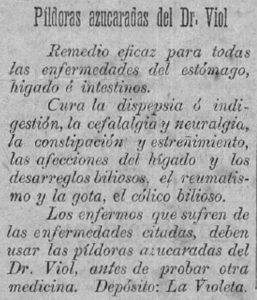 “DEFEND YOUR HEALTH !!! The fake pink pills that they sell to you in the street, as if they were the legitimate ones “DR. ROSS’ PILLS OF LIFE”, far from giving life, they are really, PILLS OF DEATH. Your home is threatened by such harmful imitations, and you must defend it from the bad faith with which some UNSCRUPULOUS TRADERS, INTENT ON ENRICHING themselves at the cost of YOUR  health. Insist that they sell you DR. ROSS’ PILLS OF LIFE,  in the original bottle that you see at the top of this engraving. Any other pink pill that you sell outside its packaging, is a harmful imitation with which they try to deceive you, and you should reject it if you value your health and well-being.” 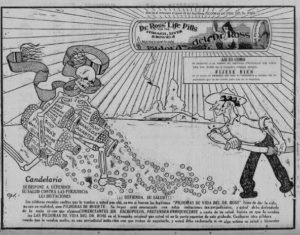 Regardless of whether they were counterfeited by pharmacists, or if such an alarming warning was nothing more than a strategy by distributors to combat retail, which was a widespread practice for almost all products in the Costa Rica of yesteryear, the Pills were publicized as a product capable of alleviating practically all the ills. They were the moringa of those times. The content of the small pink pills, always a well-kept secret was not mentioned in the bottle and some speculated that it was rhubarb.

In reality, these pills only contained a very mild laxative, with few or none of the beneficial qualities attributed to it. Its great popularity was probably due to a placebo effect.

Surely many people have seen on several national channels a well-known Costa Rican media personality accompanied by an eloquent vendor with a West Indian accent, offering carbon capsules to lose weight and hydrolyzed collagen to alleviate a myriad of ailments. These products base their supposed benefits on theories without scientific support. They do not have medical studies that guarantee their effectiveness and that they are safe for human consumption, so few pharmacies venture to sell them and they end up being offered on television. 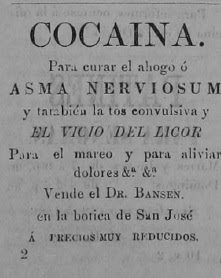 The secret of this advertising strategy lies in the confidence generated by a familiar face. Their appeal is based on the recommendation from a “famous person”.  It is then accepted by a  public avid for easy solutions to their health problems, usually caused by bad habits or the natural aging process. The gimmick is not new and it has been in use in Costa Rica since the late 19th century.

Father William’s Pills and Dr. Viol’s Sugar Pills, were products that offered the cure to many diseases of the digestive, circulatory and nervous systems. The adverts did not specify its active ingredient, nor the reasons why they had so many benefits, but they had been created by a priest and a doctor and that was a good sign. But who were those characters with such reputable titles?  Research has proven unsuccessful. Most likely they were nothing more than an invention created to generate trust in naive consumers, accustomed to respecting the ecclesiastical and scientific authorities, in the same manner, television presenters, journalists, and Youtube influencers are respected nowadays.

Psychotropic Drugs As Over The Counter Remedies For Minor Discomforts?

Among all the placebos and the shameless scams, some products had active ingredients with powerful effects on the human organism. Nevertheless, they did not escape the misleading advertising practices. Can anyone imagine curing a spell of dizziness with cocaine? Who could deny the power of marijuana to heal a cold? It now seems funny, but in the Costa Rica of our great-grandparents, there was no prohibition against drug consumption. Rather they were promoted as useful medicines for many ailments. Important brands, such as Bayer, had in their catalog products made from cocaine and heroin, which were recommended even to treat childhood ailments, such as cough or gum pain caused by teething. De know the adverse effects that those drugs have on our health. Can you imagine the harm that many unsuspecting people did to their organisms when, following doctor Bansen’s orders, they used them as cures for minor illnesses or other vices? such as addiction to liquor? And you better not think about what happened when they discovered that they could combine both liquor and cocaine, as is common nowadays. 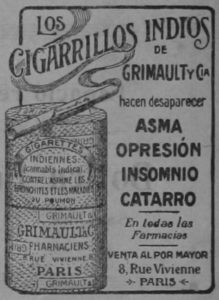 The advances in pharmaceutical research that have occurred during the last hundred years have improved the quality of life of people and have made the use of medicines safer. Government regulations guarantee that the consumer is informed about all the relevant details on the composition, effectiveness and health risks of any given medicine. This is also supported by rigorous scientific studies. Costa Rica is a paradigmatic case of medical success. Since the commercialization of medicines was regulated and regulatory institutions, such as the Costa Rican Social Security Find, were created so they are prescribed responsibly, both life expectancy and quality of life have improved markedly in comparison with the first half of the twentieth century.

Paradoxically, in the 21st century, we have experienced a setback on the issue. This manifests itself in a dangerous distrust of medical professionals in and of science in general. These ideas are not based on valid arguments but on the limitations of the educational system, which has failed to provide individuals with a solid scientific basis that allows them a rational understanding of physical phenomena, as well as to discern between truthful information and false media content. These factors have resulted in the appearance of a strong market niche for “alternative” therapies and natural medicines that lack scientific studies to support their claims. These “miracle medicines” can be seen as the reason why many move away from professionals and place their lives in the hands of macrobiotics healers and other “experts” on dubious healing therapies, which represents a risk to the health of the population.

The trickery used by those medical advertisers over a hundred years ago lives on today, and there will always be someone ready to take advantage of it, regardless of the damage it may cause.