Orcas (“Killer Whales”) are probably the smartest animals on earth other than humans (“Killer Apes”). A caged and exploited member of their species, “Tilly,” allegedly aggravated by a trainer’s ponytail, snuffed out her life at SeaWorld in Florida this past week. 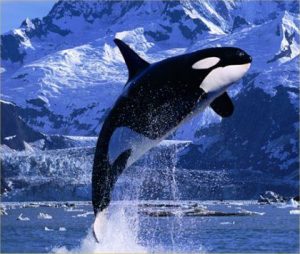 Of course smarts are very different than intelligence. Animals have an unconscious intelligence in the wild, but often become dangerous, even vicious, in human captivity.

Humans, on the other hand, are both the smartest and most unintelligent animals, destroying fellow species, imperiling the earth’s ecosystems, and killing each other by the millions in wars.

Orcas are the best hunters in nature besides humans. In the wild, they cooperate using sophisticated hunting strategies that amaze the humans that study them. Of course, that doesn’t stop others from capturing and training them to be the main assets in multi-billion dollar entertainment companies.

How smart are Orcas? Imagine a full-grown seal napping on a small ice floe in Antarctica. A pod of Orcas circle the floe and then leave to devise a strategy for getting the seal off it. What would a band of human hunters do?

This is what the Orcas did. Six of them swam with perfect synchronization toward the seal’s little island of ice, creating a sizable wave that washed the seal off the floe.

That took imagination, planning, cooperation, and perfectly timed execution. The only other animals capable of strategy and cooperation at that level are humans.

Different ‘cultures’ of Orcas in different locations will hunt different kinds of prey. Some hunt seals; others hunt salmon; some even hunt stingrays or Great White sharks. But there has never been an instance of a “Killer Whale” predating on a human in the wild, or even killing a person by mistake.

And so what do humans do with Orcas? We cage them in pools barely big enough to hold their bodies, and train them relentlessly (but with love of course, according to SeaWorld) to perform circus tricks for the masses willing to fork over the sizable ticket fee to watch the show.

Calling Orcas “Killer Whales” is a projection of our own species, not theirs, even when one of them is driven insane by confinement and noise, and turns on their trainer.

Like the pet chimpanzee that mauled the woman because something she did triggered its rage, the Orca “Tilly” snapped in its confinement.

Because they have no natural predators, humans and Orcas are “apex predators.” Orcas don’t use vision to locate their prey. They use an extremely sophisticated and sensitive sonar locating mechanism to communicate with each other and find their prey. When they are confined to pools, the echoes of their own sound emissions are deafening.

Hunting is a vestigial human activity carried out by the few remaining indigenous peoples, or by ‘sport’ hunters in developed countries using high-tech weapons (including compound bows). The plethora of survival shows notwithstanding, few people need to hunt anymore to survive. Man has become a predator of the entire planet, plundering it of its diversity and beauty.

The SeaWorld exploitation of the ocean’s apex predator is the penultimate example. Orcas are removed from their natural habitat, and trained liked dogs to perform tricks for the public, and people are shocked, shocked, when they kill a human.

The American Family Association, a right wing Christian group, is literally calling for the Orca to be stoned to death, citing Exodus: “When an ox gores a man or woman to death, the ox shall be stoned.”

In truth however, the roots of violence lay not in nature, but in humans. Psychological violence does not exist in nature, not even in Orcas or chimpanzees, the smartest animals other than man.

Violence in nature is a completely different thing than in humans. An earthquake is violent, but only the most right wing Christians would see it as punishment from God. A lion kills a gazelle, but there is no hostility toward the animal in the act.

But there is no violence, as we know it, without psychological reaction.

That doesn’t mean we shouldn’t have pets, but making a corporate product out of an animal as smart as an Orca is a testimony to man’s unintelligence.

The fact that some women have a “sugar daddy” or some men, a “sugar mommy”
Travel