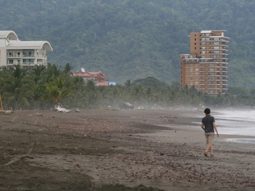 by SERGIO ARCE A.

Two foreign studies are challenging the image of Costa Rica as a destination for environmentally sustainable, and even exotic paradise, due to the impact of real estate development experienced by the Pacific Coast.

This was the main conclusion arrived at by both the magazine Traveler , National Geographic, and the Center for Responsible Travel (Crest), an organization attached to the University of Stanford in the U.S..

In one of the last editions (December 2009), the magazine published their Rank of the 133 best destinations worldwide.

Costa Rica was located in the third category (on the line).

“The green reputation of this country has managed to keep the panelists at the top. Other factors influenced the score (62 of 100): ‘large-scale hotels’ which rise on the Pacific coast, “said the publication of travel.

The study also questions the Crest survey of large hotels and residential complexes in the provinces of Guanacaste and Puntarenas.

According to this study, the addresses were given by Erick Vargas-environmental consultant, these housing developments create pressure and impact on the area’s natural resources such as water availability, soil and air, but also in the flora and fauna.

One of the areas where development is a concerned is Osa because the dense mountains are being gradually mixed with cement, as noted by the Environmental Court.

Details of the Professional Association of Engineers and Architects indicate that in both province just over 2.5 million square meters were developed in 2008, during the boom real estate.

This represented just over 40% of the total built in Costa Rica in that year.

Alfio Piva, first vice-president and coordinator of the environmental sector, acknowledged the existence of a “disorder” in the Pacific coastal areas.

The Vice President urged the municipalities to assume responsibility for the processing and approval of permits. He stressed the need for regulatory plans.

Luis Centeno, president of the Osa Tourism Chamber supported the position of Piva’s growth, almost excessive in some coastal areas, but said the country makes substantial efforts to protect its natural resources.

One of these initiatives, Centeno explained, is conducting by the 96 members of the “House” (between hoteliers, restaurant owners, real estate developers and tour guides), who pledged to undertake all their activities in a sustainable manner by no later than 2012.

“We want companies to come that create employment, but would also help in the philosophy of conservation, and continue along the current path of environmental awareness,” he said.

Wilfrid Aiello, CEO of Horizons, a travel agency of tourism that has the highest sustainability rating given by the Costa Rican Tourism Institute, said the country’s path to keep their image ‘green’ is hard but not impossible.

“We do not want to become a Cancun (Mexico) or Punta Cana (Dominican Republic). Our strength lies in the responsible development, and that is our golden goose, “he said.