Despair leads to looting of supermarkets in wake of Chilean quake

The Sacred, Symbolic, and Mystical Dimension of Water 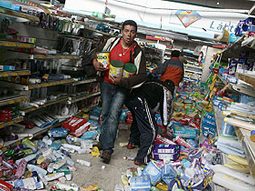 In Concepcion desperation has led to hundreds of people looting supermarkets where the vast majority of the population has no potable water, electricity and basic necessities after the 8.8 magnitude earthquake on Saturday. The capital of the Region of Bio-Bio in Chile was one of the hardest hit by the biggest earthquake to hit the country in 50 years. Members of the Armed Forces and the police had to intervene decisively to control the situation.

Yesterday, with the first light of day, hundreds of people in Concepcion went to supermarkets to obtain food, water, diapers and other necessities for survival, however, when they discovered the stores closed some residents took tools and forced open the gates in despair.

A crowd rushed onto the shelves and scrabbled for products, mainly food, but there were no shortage of unscrupulous people who took advantage of the circumstances and fled with plasma televisions, DVD players, washing machines and other electronic items. Some citizens tried to bring order and distribute essential items and prevent vandalism, but in vain.

The most affected was the leading supermarket in Prat Avenue, where a mob of 300 to 400 people overtook police who were guarding the place. On principle, the uniformed police allowed women to take out essentials like toilet paper and diapers. However, police had to intervene when individuals acting violently began to remove the appliances.

The police broke up the crowd with tear gas to prevent further outrages. Similar images were repeated in a local design center.

The villagers justified the looting because of the lack of food and no help. “It’s not stealing, we have nothing to eat and our children are hungry. Do not give us water,” shouted one of the involved in these events. The leading supermarket is near the 14-story building that collapsed and in which presumably there are about 100 people trapped alive under the rubble.

The mayor of Concepción, Jacqueline van Rysselberghe, requested the presence of the armed forces in the city. In this regard, the head of the Coordination Center for the Disaster Army, Pedro Pablo Valdivieso, reported that in the region they have 1,500 men, but “we estimate that it will need to increase to an amount above 2,000.”

Yesterday morning, Mayor Van Rysselberghe said “the situation is getting out of control”, and thus spoke to the Deputy Interior Minister Patrick Rosende, who informed him that after noon a Hercules plane filled with relief supplies would arrive to deliver food to the population affected by the earthquake.

Van Rysselberghe noted that there was anxiety in the population because they do not know when the situation will normalize, but has condemned the use of looting which was not aimed at obtaining food.

Finally, the general director of Carabineros, Edward Gordon, reported that his institution will increase surveillance at key areas affected by the earthquake and tsunami on Saturday to prevent looting.

The Sacred, Symbolic, and Mystical Dimension of Water

Water has various types of value: biological, as the foundation of life; social, because it is a good that...
Environment

How to Attract Good Luck into Your Life

How to Make Working From Home Less Stressful