These illustrious characters are remembered over the years for marking the history...
Read more

In the heart of the Costa Rican forests and jungles, there are 9 Indigenous nations distributed in 24 territorial regions
Read more
TCRN STAFFhttps://www.TheCostaRicaNews.com
Creating a Conscious alternative news network that we feel the world needs. Pura Vida!

Results of the Cisco Costa Rica Broadband Barometer Project reported a 27.3 percent growth in fixed broadband connections in Costa Rica during the first half of 2009. 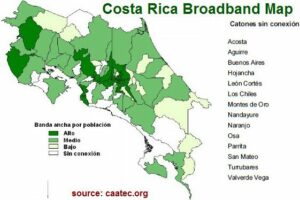 The increase in broadband connections was mainly in the enterprise and home segments. According to the study, prepared by the Costa Rican High Technology Advisory Committee (La Fundación Comisión Asesora en Alta tecnología or CAATEC) and sponsored by Cisco, Costa Rica reached 270,757 fixed connections and a 5.8 percent penetration in its population.

Despite the growth, Costa Rica still needs around 52,000 new broadband connections to reach the goal defined by the Cisco Broadband Barometer in conjunction with the government. That goal is 325,000 connections and 7 percent broadband penetration by 2010.

These illustrious characters are remembered over the years for marking the history of Costa Rica, bringing out...
Read more
News

In the heart of the Costa Rican forests and jungles, there are 9 Indigenous nations distributed in 24 territorial regions
Read more
News

deputies to approve Avoiding any confusion regarding the exoneration of taxes in favor of the Free Zones, motivated...
Read more
Environment

Women who work in biodiversity management, agriculture, ecotourism and research will be able to access financing of up to ₡ 10 million
Read more
- Advertisement -