In the last 15 years, China’s space program has invested billions of dollars with the primary aims of developing, and consolidating its own mission projects. The US National Aeronautics Space Administration (NASA) is still leading most missions around and off the planet. But the Shenzhou Space Program (SSP), the Chinese counterpart to NASA, has been launching a series of spaceships to start building the 1st Chinese permanent space station. This station is intended to be launched before 2024, almost at the same time when the current International Space Station (ISS) will be retired from operations. 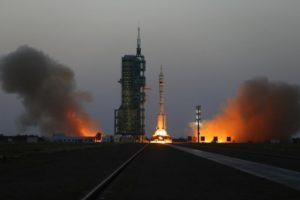 Ever since the US became the 1st country to land on the lunar surface in 1969, a few countries such as the extinct Soviet Union (today’s Russia), France, Germany, and Japan, just to name a few, have started different projects related to exploring Earth’s outer space. In more recent years, China has determined that it will be the next country to achieve such a similar goal. That is why, especially in the last few years, the SSP has been working hard to develop alternative technologies to be used on the new generation spaceships, and satellite modules that will position China as the next world superpower in space.

The Chinese top project, Tiangong, –whose name means “Heavenly Vessel”– has been a “precursor test bed of capabilities”.  These will help to achieve the culminating goal of the SSP to build the largest space station, according to Johnson-Freese, a professor at the Naval War College, who specializes in space programs and security. With that ultimate aim in mind, China has been taking important steps in order to develop, and diversify its space program industry in the last years. This requires a major investment of billions of dollars to consolidate a unique “megaproject”, which is looking towards future missions. Among these include the upcoming largest space station, a potential new manned mission for landing on the lunar surface, and even a very ambitious plan to launch robotic spaceships to explore Mars.

As a part of that megaproject, the spaceship module Shenzhou-11 was launched on October 18th, 2016, to orbit Earth for one month. A pair of Chinese astronauts named Jing Haipeng and Chen Dong, worked on a 30-day mission at the Tiangong-2 space lab, and returned safely to Earth November 18th, 2016. So far, this has been China’s longest-ever mission up-to-now.