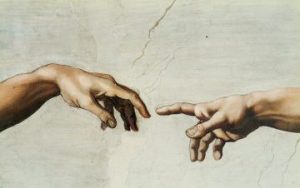 One of the saddest and most misguided trends of late is the stated preference of a growing number of people for animals over humans.

I’ve had people write to me and say things such as: “I value animals over humans and given the choice would choose a world of animals over people.

In fact I believe humankind is the cause of most problems in the world including destroying wildlife.”

The kernel of truth in such a worldview is swept away in the reign of wrongheaded premises that currently inundate human thinking and feeling, contributing to the very thing it despises. Can such a mentality be successfully challenged, or have too many people given up on humanity to make any inroads for insight in our age?

Despite all the platitudes about peace on earth and goodwill toward men, this is a season of reflection. None of us is separate from the problems that humans are causing the planet and ourselves.

It used to be clear which way of thinking underpinned the conservative worldview, and which underpinned the liberal worldview. Liberals generally believed that nature, including human nature, were innately harmonious, and somewhere man went wrong (the Agricultural or Technological Revolutions being the usual suspects). Conservatives believed that life in nature was “nasty, brutish, and short,” but there was a God that cared about man.

These days, most conservatives and liberals share a deep cynicism about humankind. Conservatives because they still view man as inherently sinful, bestial, and unregenerate, unconstrained by the moderating forces of tradition and institution. Liberals because they view man as an inexplicable anomaly in nature, a malignant life form for whom the earth waits for extinction.

The vast majority of people, whatever their religious and political persuasions, believe the universe is utterly indifferent to the fate of humankind. The underlying conservative/liberal, religious/atheist consensus is that the universe is essentially chaos and chance. From that premise, it’s a short step to the self-fulfilling prophecy that there is nothing beyond thought–the mind of man.

Thus, belief in God and atheism are two sides of the same coin. Either way, a tacit attitude of misanthropy feeds into the destructiveness of man. Of course ultimately, misanthropy is self-hatred.

The human brain has the capacity to come into contact with the ever-present actuality of death, and through it, the infinitely creative source of the universe. Not through scientific knowledge, which requires insight for wise use, nor in the self-projected idea of a self-projected creator.

There is an inseparable intelligence intrinsic to energy and matter (including dark energy and dark matter) of the cosmos. That intelligence cannot be contained in dogmas and buildings, sectarian or secular, but can only flow through the human heart when the human mind is deeply quiet.

When the mind is effortlessly silent in the undirected action of attention to the movement of thought and emotion, the energy and love that permeates the universe flows through one to the degree of one’s capacity.

There can be no misanthropy in such a state, which is completely without separation, since one deeply realizes that we are all inextricably part of the human experiment.

Viewing the rapidly worsening condition of man, one feels sorrow and sadness at what humans are doing to this beautiful planet and to humanity. But in freeing oneself from the dark current of destiny, one does not stand apart.

Whether or not humankind makes the transition from the cunning primate man to the awakening human being, the eternally creative source of life cannot be destroyed. For even if man destroys the earth and himself by listening to his own voice of self-hatred, life and intelligence are infinite.

Wherever sentient life exists in the universe, and keeps growing in understanding, human beings feel the wordless pulse of the sacred.

A digital nomad is a professional who uses the internet as their work tool and thanks to this they...
Health