A New Theory of Human Nature

Today we want to exalt the benefits of Costa Rica, the Latin American country that has allowed us to grow as professionals with the help of its founder, Visionary Daniel Yepez. This is an article that does not resemble the others because through this edition its own protagonists speak
Read more

(This week is the 53rd and finalinstallment of the book, “The Band Director’s Lessons About Life”, which TCRN is...
Read more

Inhabitants of communities throughout the country will be able to practice again in controlled groups under technical supervision, aerobics,...
Read more
TCRN STAFFhttps://www.TheCostaRicaNews.com
Creating a Conscious alternative news network that we feel the world needs. Pura Vida!

For at least 100,000 years, since modern man first emerged from Africa, humans have been as we are—tribal, self-centered, and dominated by the separative capabilities of ‘higher thought.’

Now, as the fragmentation of the earth and humanity by the unwise use of symbolic thought reaches the breaking point, pressure increases for a transmutation of consciousness.

That a single species should have the power to denude and destroy the planet that gave rise to it is not just an existential mystery; it poses basic questions about consciousness itself.

On one side, many take false refuge in the belief that human beings are unimportant–infinitesimal specks on a speck in space. But the very fact that humans evolved along with all other life, yet as a sentient species that has started the “Sixth Extinction,” raises the question: What is the place of potentially intelligent species in the universe?

On the other side are people (often so-called religious people) who insist that the previous five extinction events (defined as “a sharp decrease in the number of species in a relatively short period of time”) prove that nature is destructive, and so we should expect man to be. ‘Man is bad, and salvation is an individual matter,’ they believe.

Does one really need to point out that there is a vast difference between a natural event, such as an asteroid impact causing a global ecological collapse and mass extinctions, and an event caused by an allegedly sentient species? No, our very destructiveness as divisive ‘man’ points to our divine potential as human beings.

Conventional atheists say that man has no meaning anymore than any other species, and that our destructiveness is 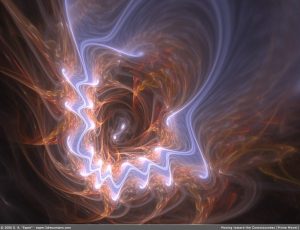 evidence that life is a chance event against a background of chaos. New Agers talk about ‘the Higher Self’ as a manifestation of cosmic consciousness, but that both begs lots of questions, and upholds contradiction and duality.

There is an unrecognized mystery in the emergence of sentient species. As science and technology increase, do all sentient species tend to fragment their planets all to hell? This question comes from and speaks to the heart of what used to be called ‘the riddle of man.’

There is also the lesser mystery of thought-consciousness, which consumes neuroscientists at present. It will probably be resolved by science, and replicated with computers. But the infinite mystery of life can never be scientifically solved.

So we we’re talking about three kinds of mystery: An unrecognized mystery (having to do with the evolution of symbolic thought, wherever it occurs in the universe); a recognized mystery (how the brain fabricates a self and the thought-consciousness associated with it); and an infinite mystery (irreducible, unsolvable, and thus spiritual).

Astronomers have so far discovered about three hundred ‘exo-planets’ orbiting distant suns, a few in ‘habitable zones,’ probably with water like earth. In the lifetimes of many people alive today, I think science will find that single celled life is quite common in the universe; that multi-cellular organisms are quite uncommon; and that sentient, potentially intelligent species such as man are rare.

Of course some people believe that we’ve already been contacted by extraterrestrials, and that they’ve ‘seeded’ human civilization, or are about to invade it. There’s no real evidence for this however. Besides, contrary to what Stephen Hawking says, any species advanced enough to be capable of interstellar travel would have grown beyond aggression, and be interested only in whether this seed of potential intelligence (humanity) will make the grade, or fade out.

My hypothesis is that all sentient (semi-conscious and potentially fully conscious) life passes through essentially the same crisis of thought-consciousness, and the awakening of a higher consciousness.  (They may not carry the stupid use of thought to the brink of ecological and spiritual destruction however, as we humans have.) The species that make the transition have neither the desire for inter-species conflict, nor the desire to interfere with the processes of conscious transmutation in sentient species on other planets.

But I’m not nearly as interested in the question of extraterrestrial life as I am terrestrial consciousness. The brain that gave rise to religion and science is the same brain that pits the religious mind against the scientific mind. And neither high science nor organized religion can solve the human crisis, because both are products of our dualistic consciousness.

The earth, and the human spirit can’t wait until astrobiologists confirm that the emergence of life is as much a property of the universe as the formation of planets, and that sentient, technological species all follow the same basic trajectory of crisis and resolution, or extinction.

Can we, within ourselves, resolve the crisis of human consciousness in time to preserve the integrity of the planet, and ourselves?

Today we want to exalt the benefits of Costa Rica, the Latin American country that has allowed us to grow as professionals with the help of its founder, Visionary Daniel Yepez. This is an article that does not resemble the others because through this edition its own protagonists speak
Read more
News

Unanimously, the Legislative Assembly's Special Permanent Commission on Security and Drug Trafficking affirmatively ruled a bill that seeks to prohibit naturalization for foreigners with...
Read more

Political Monsters Are Not Embodied In Words; They Are Embodied in People: Trump and The Civil Protests

Donald Trump's speech is not what is really executing minorities or differentiated groups in the United States, but rather, it is his actions or...
Read more

Are you tired of cleaning the floor every day? Do you wish there are ways to clean it faster to give you free time...
Read more

Pilar Cisneros: ‘’ Costa Rica Is a Country Impoverished by Some Inept Politicians. ’’

The experienced journalist Pilar Cisneros sent a strong message to President Carlos Alvarado, on the second day of the blockades in protest of the...
Read more
- Advertisement -