Yesterday’s earthquake in Mexico has killed over 200 people 21 of them schoolchildren. The earthqueake struck Central Mexico after midday.

Yesterday, there was another quake near Central Mexico, around 75 miles away from Mexico city and caused extensive damage, making 44 buildings collapse. Due to this event, many homes , schools and office buildings were also struck. President Enrique Peña Nieto did a flyover following the earthquake.

Among the dead, 21 students and fours teachers have repoterdly died at a school that collapsed in Mexico city. Up to now, the government has managed to rescue 11 people but some teachers remain missing.

Rescuers have kept on combing through the wreackage, expecting to find survivors. They have even paused to listen for voices. According to the associated press, some survivors have supposedly been sending WhatsApp messages inside the school and other collapsed buildings.

Jorge Vidal, director of operations at an organization called Save the Children in Mexico, said that kids are more vulnerable in this kind of situations.

“Children are often the most vulnerable in emergencies such as this, and we are particularly concerned because schools across the region”

Hanna Monsivais, who is one of the coordinators of Save the Children in Mexico, has been working out on the streets with many other people trying to find survivors and help their neighbors. Many streets have been cordoned off because there are still many dangerous buildings because of damage.

She said that luckily many volunteers have been bringing water and other stuff. A lot of people have volunteered to remove debris as well.

“Volunteers are bringing water, food, clothes and face masks so that they can help the official authorities move all the debris and rocks, because there are still people trapped under buildings”

She added that authorities sometimes ask for silence in order to hear people that may be trapped.

“Every once in a while, authorities ask for silence so they can hear the people who are still trapped. It’s amazing what people are doing for others, but some people are clearly still in complete shock.”

According to Monsivais many streets, homes and buildings are without electricity service and communications are strictly limited.

“This night is going to be tough. For sure, tomorrow the death toll will rise.” 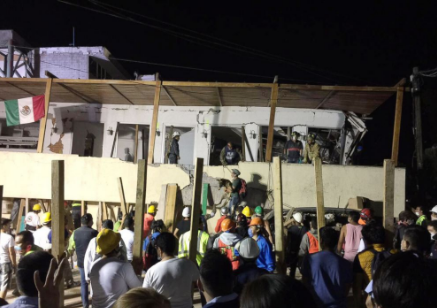 Mexico city’s airport is also in chaos. According to a report by ABC News, the ground rippled, and walls fell when the quake struck. Some people even thought they were in the middle of a terror attack.

“I felt the ground shaking, and I heard everyone screaming and starting to run”

This is Enrique Rebsamen School in Mexico city. In the photo we can see rescuers searching for children trapped due to the earthquake. More than 100 buildings are said to have collapsed because of this natural event. 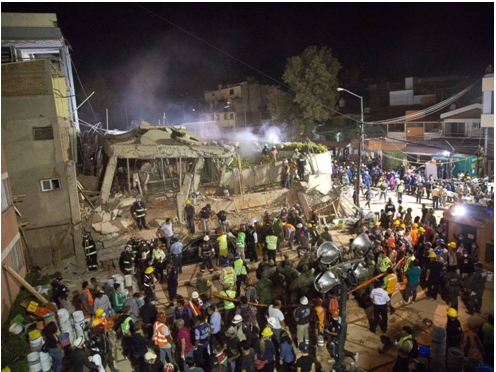 Some people say that the ceiling of the school seemed to be swinging back and forth and they had no choice but to run in different direction.

The tremors lasted around seven minutes. Once the quake subsided, some volunteers swooped in to help injured people. After some minutes, police helicopters and the military showed up.

The reports say that the tremors started around 1:14 pm near a town called Raboso, located in Puebla. It hit with magnitude of 8.1 off the southern coast of Mexico. This quake killed more than 20 people in one sitting.

The earthquake that occurred on September 7th was also devastating. It killed around 36 people and destroyed at least one-third of the homes. Due to this, this place became a town with a lot of uninhabitable houses.

A lot of residents are now sleeping outside their homes becaude they have fear of aftershocks, according to Eduardo Mendoza, who works as a senior program manager for a medical supplier organization based in Southern California.

“People, rightfully so, were already sleeping outside because of fear for aftershocks, and then comes this big earthquake.”