Inaugurated the first phase of wind farm in Guanacaste which began operating 30 of the 55 turbines that make up the wind farm. For year-end planning to finalize the work and complete the nominal power of 50MW. 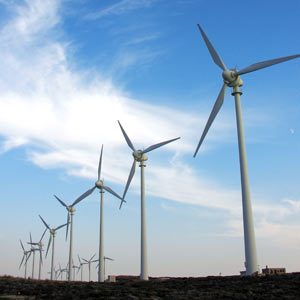 Also, the Instituto Costarricense de Electricidad (ICE) plans to add another 80 MW more. The wind energy project was developed on the farm known as “La Gloria”, which has a wind potential of around 100 MW. SARET, together with GDF SUEZ and Juwi, still owns the remainder of the farm and learned that among their plans is to develop the full potential that exists in the property.

In 2006, SARET participated in the process of competitive bidding No. 7283-E, promoted by the Instituto Costarricense de Electricidad, for submission of bids for the purchase of energy from wind and with its Partners, Juwi and Enerwinds, won the tender for the installation of the wind farm and the sale of power to ICE.

According to reports, the existing wind resources are exceptional, with an annual average wind speed of around 11 m/s, capable of producing power about 90% of the time.

Wind power has a strong potential for growth in Costa Rica because of the high winds in the area. In many places in the country, winds average speeds between 15 and 20 miles per hour. Only about 9 mph winds are necessary for favorable energy efficiency rates, whereas wind speeds of much higher than 20 mph are considered too high. Many may begin to see wind as a better alternative to solar and hydroenergy in Costa Rica, since solar energy remains virtually unaffordable there and because the dry season affects the supply of hydroenergy.

Many actions have taken place in Costa Rica in recent years to promote renewable, sustainable energy use, and more specifically, wind energy use. In the 1980s, Costa Ricans began to grow more aware and concerned about climate change. During this time, the country’s government started to attend more meetings regarding this issue. In the 1990s, Regulations to Control Gas Emissions and Particles from Automotive Vehicles passed, limiting harmful emissions and forcing all vehicles to go through inspections. Costa Rica also formed the National Committee for Energy Conservation, a division of the Ministry of Environment and Energy, around this time. In 1994, the committee passed Law 7447, which exempts equipment used for renewable energy from import duties.

This legislation has led to the increased use of wind energy. Costa Rica created its first wind farm in 1992 in Tejona. Since then, a few others have materialized. One of the largest in Latin America, the Tierras Morenas Wind Farm built in 1999, lies in the Guanacaste region of Costa Rica, near the Nicaraguan border. The winds at this farm typically average around 20 mph. The wind farm sells its electricity to the national electric company, Instituto Costarricense de Electricidad, under a 15 year energy purchase agreement. The farm;s 32 Micon brand wind turbine generators produce 70,000 MWh of electricity a year. If fossil fuels had been used to produce this amount of energy, 57,000 tons of carbon dioxide would have been released into the air.

The World Bank has funded three wind projects as part of its Prototype Carbon Fund. Two of these are in Costa Rica, in Chorotega and Vera Blanca. The New World Power Corporation has also helped make new wind farms in Costa Rica, while the International Finance Corporation has provided its aid by approving wind projects there. Global Energy Concepts has helped as well and has taught 20 countries, including Costa Rica, how to use wind power effectively.

The future of wind energy looks bright in Costa Rica. The high winds in many areas of Costa Rica make it an appropriate place to install more wind farms, while declining costs make these farms more possible each year. Furthermore, as society grows more aware of the environmental implications of fossil fuels and nuclear energy, wind energy can only become more prevalent.