What to Know about Costa Rica Common Food and Drink

The Government of Costa Rica has decided to facilitate entry requirements in...
Read more

Costa Rica today satisfaction for the early entry into force of the...
Read more

To generalize a Costa Rican meal, one would certainly have to talk about black beans and rice (gallo pinto). This simple, standard dish, often referred to as comida tipica, is the backbone of Costa Rican cuisine. While many of the dishes are still prepared with oils high in saturated fats, Costa Rican food is generally quite healthy when coupled with an active lifestyle. Cheese and other dairy products are rarely utilized.

Cheese can contribute to a high amount of fat and cholesterol to your diet, especially cheddar cheese.

Often served with a good portion of fruits or vegetables or both, the 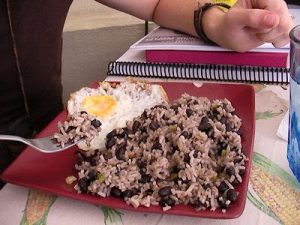 meals are very well rounded and generally high in fiber.

Other factors in the Tico’s healthy mealtime experience are their eating habits. Firstly, Ticos do not eat in excess. Their modest proportions are much like the Europeans and smaller than that of the U.S. Secondly, Ticos make lunch the main meal of the day. In fact, many employers will give an additional hour off for a post-lunch casado. This convention will provide more energy during the day when people need it, and less energy at night when it will likely be wasted and converted to fat reserves.

San José possesses a broad spectrum of fare. On one hand, it is the center of fine dining and international cuisine in Costa Rica; on the other, its streets and markets are filled with sodas, or small restaurants that serve light meals and snacks. Away from the big city, Ticos are less adventurous eaters, so the food becomes more grounded in peasant culture and less varied.

Staples
As mentioned above, beans and rice is the basic variable in almost all Costa Rican cuisine. A typical meal is the casado, the name referring to the eternal “marriage” of its components. Consisting of rice and beans, meat or fish, fried plantains, and a carrot, tomato, and cabbage salad, this basic and well-rounded meal strikes a good nutritional balance.

The plantain, or plántano, is probably the quintenencial Tico snack. It has the appearance of a large banana, but cannot be eaten raw. It is sweet and delicious when fried or baked, and will often accompany most meals. When sliced thinly and deep fried, the plantain becomes a crunchy snack like the potato chip.

Arroz is a dish of fried rice which may be offered with chicken (pollo) or shrimp (gambas). For breakfast, it is common to be

Soups and Stews
Olla de carne is a delicious stew made with beef, potatoes, carrots, chayote (vegetable pear), plantains and yucca. Sopa negra is a simple soup made with black beans. The hearty Sopa de mondongo is made with tripe and vegetables. Guiso de maíz is a corn stew.

Vegetables and Fruit
Vegetables are utilized mostly in soups and stews, or, as a side dish of a casado meal, fresh cabbage, tomatoes, and carrots make up the typical salad. Corn is one of the most favored vegetables, and it is usually prepared in the form of tortillas and corn pancakes. Corn on the cob is sometimes roasted, elote esado, or boiled, elote cocinado. Empanadas are corn turnovers filled with beans, cheese, and maybe potatoes and meat. And Patacones are fried mashed plantains with a liberal sprinkling of salt. 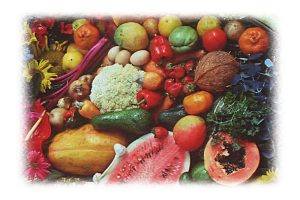 Marañon is a curious fruit whose seed is the cashew. The skin of the fruit is bitter, but the flesh delicious. Cashews must be roasted before they are consumed; a raw cashew is poisonous.

Zapotes are a brown fruit resembling an oversized avocado in appearance and texture. Unlike the avocado their pulp is very sweet and bright red-orange in color.

Guanábanas (soursop) are textured, green football-sized fruits with white fibrous flesh. Some eat the fruit plain, but most prefer it as a juice or with milk.

Pipas (green coconuts) are extremely popular among Ticos. By chopping the top with a machete and tapping the hollow core with a straw, you have a refreshing drink.

The pejibaye, a relative of the coconut, is a bizarre fruit. It’s flesh is thick and fibrous, and resembles the taste of chestnut or pumpkin. They are usually boiled in salt water, peeled, halved, pitted, then eaten.

The manzana de agua is a dark red, pear-shaped fruit that is full of juice and quite refreshing.

The palmito (palm heart) is the inner core of a small palm tree and makes a great delicacy as a cocktail.

Carambola (starfruit) is a yellow-green tender fruit that when cut across makes slices that look like five-pointed stars. The taste is lightly sweet and juicy.

Meats and Fish
Roast pork is the chief meat staple. Pork and chicken are often roasted over coffee wood for a savory, smokey flavor. 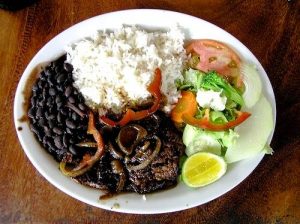 Steaks can be found at many restaurants, and chewy is desirable. Ultra-fresh seafood is more readily available near the coasts, though shrimp and lobster are offered throughout most of the country. San José’s fish of choice is sea bass, or corvina; however, dorado, swordfish, and myriad others are available at the coastal resorts. As a common appetizer, Ceviche is a dish of raw fish marinated in lemon juice with cilantro and onions.

Refrescos, made of blended fruit and ice, are very popular refreshments, and are available at most corner stores and restaurants. A sweet and spicy drink, horchata is made of roasted ground rice and cinnamon.

Wine is not very popular and is usually imported and expensive. The working man’s drink is guaro, a clear white spirit that doesn’t always appeal to visitors.

Coffee is also an extremely popular and nationally-revered drink.

The Caribbean coast has its own unique cuisine, distinctive of the rest of the nation. The dishes usually include coconut milk and more characteristic spices, like ginger and curry. Roadside stalls sell a vast array of fruits: apples, papayas, mangoes, bananas, pineapples, apricots, and melons. Coconuts are widely used in the Caribbean. Grated coconut is used in many deserts and cakes. Coconut milk is a staple used to bind other ingredients in recipes. Milk is used in cheeses, such as the soft white queso blanco, which frequently finds its way into deserts. The akee is a spongy yellow fruit native to Africa and brought to the Caribbean by the English. It is boiled to produce something that resembles scrambled eggs, then sautéed with salted cod. The patí is a spicy meat pie resembling a turnover. Rondon (“rundown”) consists of fish or meat with yams, plantains, breadfruit, peppers and spices.

The Government of Costa Rica has decided to facilitate entry requirements in...
Read more
News

Costa Rica today satisfaction for the early entry into force of the Treaty on the Prohibition of...
Read more
Science & Technology

A new business concept will arrive in Panama, positioning the country as a...
Read more
News

The Costa Rican Tourism Institute (ICT) reported this Saturday that after a renewal of tourism products and a varied offer, it seeks...
Read more
News

The lawyer Mario Cerdas Salazar, defender of marijuana for recreational purposes, will face a trial as of October 26th for apparent cultivation and supply of the drug
Read more
- Advertisement -

In our country, the main dishes of our traditional food incorporate several basic elements of Latin American...
Read more

Famous Costa Rican poet, journalist, writer and politician. In 1887 he was appointed Attaché of the Embassy of Costa Rica in Washington, United States
Read more

Costa Rican coffee is the best! You come to appreciate it more when you travel to other places, but especially when you...
Read more
- Advertisement -