On clear nights (in northern California there are few clouds for two-thirds of the year) I go into the backyard before bed to gaze up at the stars. Through binoculars for the past two weeks I’ve watched three or four moons dance around Jupiter, which is normally a distant speck. 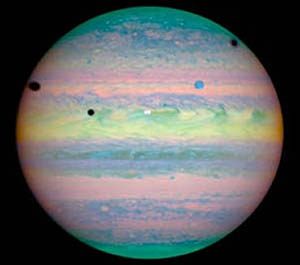 Even through binoculars, the awe-inspiring spectacle of Jupiter and its moons look like a mini-solar system. Indeed, the planet is so huge and its moons so varied that astronomers sometimes refer to it that way.

Astronomers also announced this week the discovery of a new, Earth-like planet in our galactic neighborhood (a mere 120 trillion miles away). Three times the mass of the Earth, it circles a dim, dwarf star with the appropriately inaccessible name Gliese 581, at a whirling distance of only 14 million miles (we’re 93 million miles from ole sol).

Five hundred planets have been found orbiting stars in the Milky Way, almost all of them gas giants like Jupiter. This is the first one that astronomers are sure occupies the “habitable zone,” where liquid water and suitable atmosphere for life are very possible. Not too hot and not too cold, it’s also called the “Goldilocks zone.” Whether Mars would be placed in that category if viewed from Gliese 581g (the even more obscure name astronomer’s have given the earth-like planet), I’m not sure.

Man is inching closer to the supposed psychological shock of finding out that microbial life is quite common in the universe, complex forms uncommon, sentient species rare, and intelligent species few and far between. That’s my prediction anyway, and we’ll probably know by the time I kick off whether I’m right or wrong.

But the knowledge of extraterrestrial life won’t make Homo sap any more intelligent than any other knowledge.

Astronomers have been able to date our solar system precisely, to the oddly sequential date of 4.567 billion years. That’s four billion, five hundred and sixty-seven million years, plus or minus a mere million.

The fact that we’re able to know the age of our solar system with such precision produces one of two effects on people, depending on one’s existential epistemological orientation. In other words, it depends whether one can still feel mystery or not.

The 4.567 billion year solar system birth date transcends the knowledge that enables its precision in those who regularly still feel the mystery of life. But for those who put knowledge first, it’s just another fact in man’s exploding database.

I knew a very smart fellow in Oregon that could name every flower, fern, and mushroom that we passed on the trail. At first I was happy to be awash in this new knowledge, not having lived in a rainy clime before.

But during long hikes or backpacking with him, the surfeit of knowledge, and our very different epistemological orientations, soon became tiresome, if not downright annoying. The longer we were in nature, the quieter I became, inwardly and outwardly. But my friend never stopped chattering on from his knowledge base.

Someone who gives the highest value to knowledge slowly loses his or her capacity for mystery and awe. But someone who retains a childlike wonder at the beauty of the earth and scale of the universe has his or her sense of mystery heightened by the accretion of knowledge.

People who believe that the universe is chaos and knowledge gives man order are limited to one dimension of life. As much as they love their work, most scientists fall into this category I’m afraid.

On the other hand, people who don’t idolize scientific knowledge, but see it simply as an impressive achievement of humankind, retain wonder and mature in spiritual capacity. Marveling at man’s scientific knowledge, much less species’ pride in technology is tempered by the chaos man is generating on this planet using our vaunted gifts of knowledge and technology.

Of course, it’s no use arguing epistemology. Our relationship to knowledge is too deeply embedded to be open to arguments regarding the limited place of knowledge in human life.

But if one reflects on the difference and relationship between insight and knowledge, one can see the place of both. Science can and does give us insights, which we codify into knowledge. But science can never pr0duce the state of insight, in which the mind and brain are deeply silent, aware, and awake.

Perhaps all one can do is suggest to someone, even the most knowledge-encrusted scientist, to leave his or her knowledge in the house, and take the binoculars out over a few clear autumn evenings this year, and watch the moons of Jupiter dance around the gas giant.

Members of Costa Rican indigenous peoples demonstrate this week outside the Supreme Court denouncing what they consider to be...
Spiritual