Emma Gamboa Alvarado, Pedagogue, Costa Rican teacher, supporter of a comprehensive and democratic education, advocated respect for the dignity of all people, the use of their experiences and the development of their creative powers.

Declared by the Legislative Assembly Benemerita (Well deserving) of the Homeland, according to Agreement No. 1999 of May 27, 1980.

Her image is represented on the ten thousand colones bill of 1998. Her parents were José Gamboa and María Alvarado. By her marriage to Dr. Wade Bower in 1965, she is also known as “Emma Gamboa de Bower“.

She was born on October 17, 1901 in San Ramón de Alajuela, a city where she completed her primary studies. Her parents were Mr. José Gamboa and María Alvarado, a family of humble origin.

As a child, she excels in school for her speed in reading comprehension, and in her facility for mathematics; not so in other subjects. She has a fondness for reading. Originally from a family with marked economic limitations, she requires a scholarship requested by her mother to start secondary education in the recently founded “Escuela Normal”, in which she passes the entrance exam with the best average.

She graduated as a teacher at the Costa Rican Normal School in 1920. She continued her studies at Ohio University, United States, where she obtained a bachelor’s degree in Educational Sciences in 1939, later a Master of Arts in 1940 and a doctorate in Philosophy. in 1951. 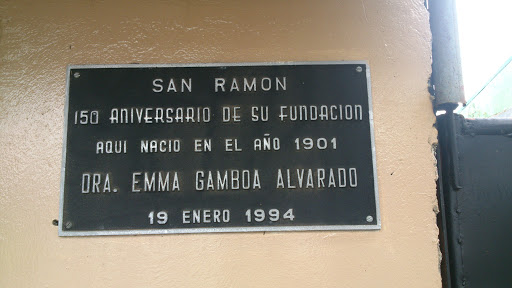 In 1942 she became a founding member of the National Association of Educators (ANDE) and five years later she was elected as the second president of that Association. In 1947 she was appointed Dean by the Advisory Council of the Faculty of Pedagogy.

When in 1949, Otilio U Blanco assumes the presidency of the Republic, after the Civil War of 1948, Emma Gamboa is appointed as Vice Minister of Education (ad honorem) and in 1953 she exercises the post of minister, for three months.

In 1958 the building of the Faculty of Education of the University of Costa Rica was inaugurated, the result of her persistent efforts. In 1960 she contributes to the creation of the New Laboratory School (primary laboratory), concluding an agreement between the University of Costa Rica and the Ministry of Public Education. She exposes her ideals in didactic books, in active readings, in talks and in advisory seminars; at national, Latin American, European and American conferences.

Supporter of a comprehensive and democratic education, advocates respect for the dignity of learners, the use of their experiences and the development of their creative powers. She publishes several articles and works of a technical nature at different times which, in due course, contribute new teaching methods for Costa Rican children.

However, her most widespread works have been the textbooks with which she provides a great contribution to Costa Rican education, such as Mi Hogar y Mi Pueblo , Lecturas activas, Paco y Lola and La Casita del Monte.

She meets Doctor Wade Bower, on a trip to the United States, with whom she marries and lives until he dies, seven years later.

Emma Gamboa dies on December 10, 1976 in the city of Heredia, after a long fight against cancer.

For her impressive career in various facets of her life and mainly as a distinguished educator, for her constant and uninterrupted struggle, in favor of the dignity and love for the National Magisterium, therefore, of the Costa Rican youth; The Costa Rican Association of University Women proposed, with the support of other organized groups from different parts of the country, as just recognition of merits, the initiative to declare the highest honor that Costa Ricans grant, that of Benemérita de la Patria (Well deserving of the Fatherland), an honor that was finally granted with great acceptance by the Legislative Assembly, on September 12, 1979.

The Central Bank of Costa Rica decides to include its effigy in the ten thousand colones banknote of 1998, being the first time that this occurs in the history of this bank’s monetary issues, as a result of social recognition of women’s contribution to development. from the country. The design of the banknote was made by the Graphic Arts student at the University of Costa Rica, Marco Morales Salazar.

Finally, the image of Emma Gamboa is currently used as a symbol of struggle and a milestone in the history of Costa Rican education.