Who Will You Meet in the Rainforest? Part III: Reptiles

How Remote Working Has Impacted the Global Economy and the Environment

Many visitors to Costa Rica arrive with the preconception that its rainforests are teeming with dangerous reptiles, the rivers are filled with crocodiles, and in every tree or pile of leaf litter is a poisonous snake. It’s true that there are dangerous reptiles in Costa Rica, and we must always be wary of them. The single most dangerous animal in Costa Rican rainforests is the fer-de-lance, a venomous ground-dwelling viper known for attacking people. The rivers also can and do have crocodiles that may attack and kill people.

But for the most part, meeting reptiles in the rainforest is uncommon. They are shy and well camouflaged, and the overwhelming majority of species are harmless. Many are beautiful, and the experience of sighting a reptile in the rainforest should be considered special.

Here are some of the most commonly encountered reptiles in Costa Rica: 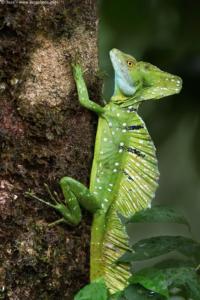 Among the most incredible of natural phenomena the world over is the site of a Basilisk, also known as the Jesus Christ lizard, racing across a stream or pool of water on its hind legs. Tiny flaps of skin between the toes on their back legs increase the size of their feet and make it possible for them to escape predators this way. There are three species in Costa Rica. The double-crested basilisk is an emerald green, found in the Caribbean lowlands and southwestern Costa Rica. The common basilisk has a prominent crest and is found along all the Pacific lowlands, while the striped basilisk is brown with white streaks across its face and found in the Caribbean lowlands. 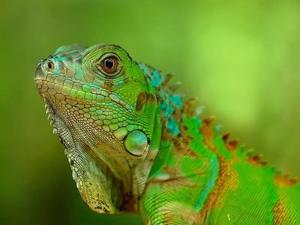 A common sight while sunning on the edges of the tree canopy, the green iguana is something of an emblem of the tropical forests of Central America. Most individuals are green, occasionally with black stripes, but the enormous males turn a sunset orange at the onset of the breeding season in December. They can be found throughout the lowlands of Costa Rica, and are sometimes hunted for their meat. 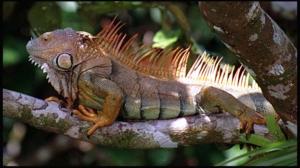 The ctenosaur, also known as the black iguana, is an easily seen reptile along all of northwestern Costa Rica and remain common down to the central Pacific coast. They perch on fences, rocks, trees, and even roofs. They can be distinguished from the green iguana through their tanner color, which sometimes approaches a dusty brown. Ctenosaurs are also hunted for their meat in parts of Costa Rica. 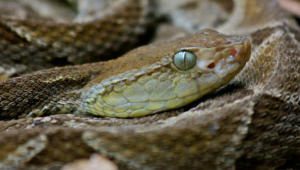 The most dangerous animal in Costa Rican rainforests is the fer-de-lance, a pit viper with venom capable of killing humans. Fer-de-lances are responsible for nearly half of all snakebites in Costa Rica, but the fatality rate has reached almost zero thanks to good access to medical care. Fer-de-lances can sometimes be found in bushes or trees as well, especially younger individuals, but what makes them so dangerous is that they often hide in leaf litter during the day, when they rest, and their superb camouflage makes it easy to accidentally step on or near one. The fer-de-lance often retreats when provoked, but it can be aggressive. Avoid wearing open-toed shoes in the rainforest for this reason. 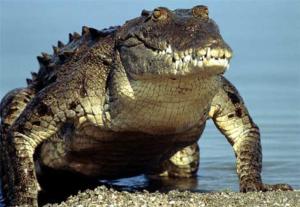 Best seen sunning themselves by the Río Tárcoles bridge by the entrance to Carara National Park, crocodiles can be found in fresh, salt, and brackish water. Despite their sedate appearance, they can be dangerous, and are capable of moving quickly on both water and land. The best bet for staying safe is never swimming in rivers known to have crocodiles. Guidebooks are often a good source of information regarding crocodile presence on a river, but the best bet is often to just ask the locals. 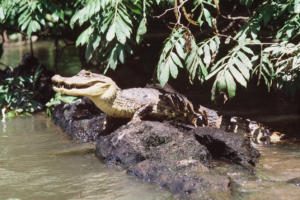 The caiman is like a small alligator that preys on fish and amphibians. They are not a threat to humans. Caimans can be spotted mostly in the lowlands, in rivers, marshes, ponds, and lakes. They’re often inactive as they bask on the shore or float along, their eyes and nostril peaking over the water’s surface. Shine light into the eyes of caimans at night and they will reflect an eerie red. 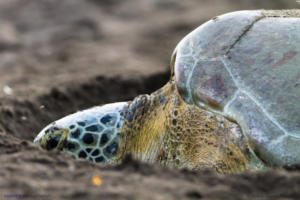 Costa Rica is world famous for its important sea turtle nesting sites, including Tortuguero on the Caribbean and Las Baulas on the Pacific, among others. Five species of sea turtle nest in Costa Rica. Green turtles and leatherbacks nest on both coasts, while hawksbill and loggerhead nest on the Caribbean, and olive ridley make major nesting sites on the Pacific, especially in Guanacaste. Las Baulas is the most important nesting site for the critically endangered leatherback turtle in the entire Pacific coast of the Americas.

Although Costa Rica is home to over two hundred species of reptiles, their cryptic coloration and retiring habits make most of them difficult to see, including some of the most common ones mentioned here. Even in the lowland rainforests where so many of them live, the reptiles of Costa Rica often evade detection, and any sighting should fill the lucky visitor with wonder.

Costa Rica is a country defined by its own motto: ‘Pura Vida’. A nation located in Central America that lacks an army, which remains open to visitors like few others
Health

How Remote Working Has Impacted the Global Economy and the Environment

The New Republic of Barbados Names Rihanna A National Heroine