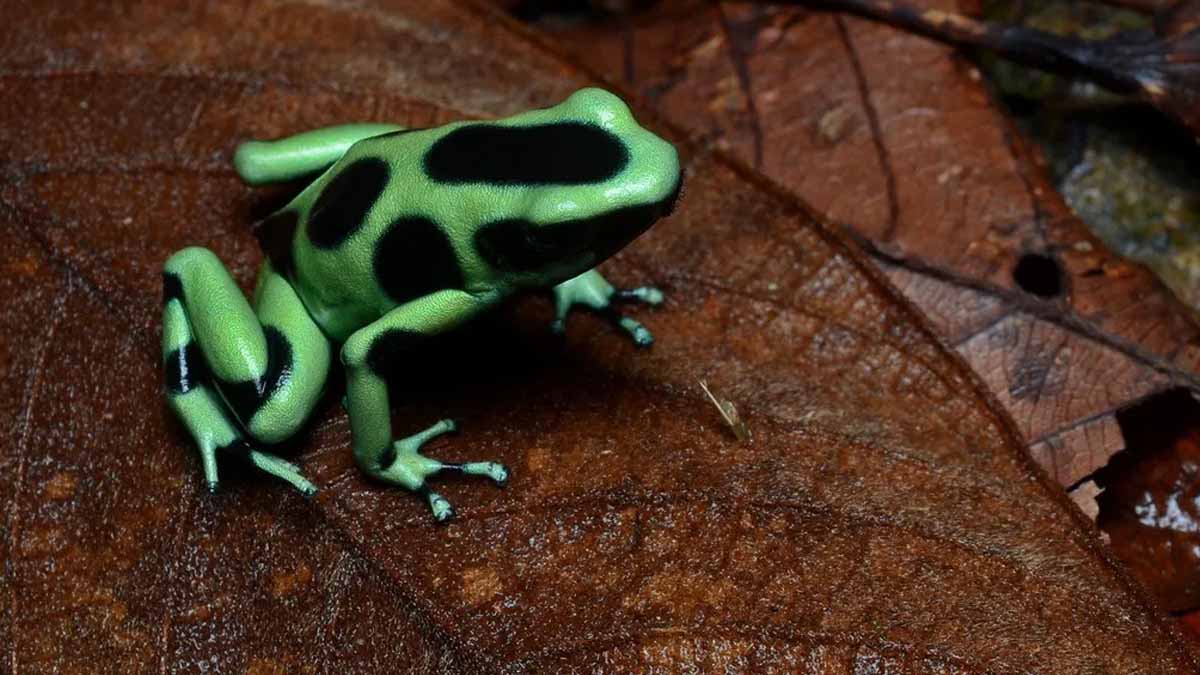 Poison dart frogs belong to the scientific family Dendrobatidae, which contains more than 175 individual species that are distributed in a range that includes much of Central and South America. They are peculiar amphibians that hide a warning with those bright and striking colors.

Dendrobates auratus, is a very common anuran amphibian in the humid forests of the Costa Rican Caribbean. It has daytime habits and is very territorial, being its busiest time in the early afternoon (around 2 pm.).

It lacks membranes on its legs, and has colors ranging from green to bluish and in some populations to brown. Measuring more than 4 centimeters and its diet is exclusively based on ants and other small insects.

The bright colors warn of its toxicity, the toxins are similar to that of the red frog: Dendrobates Pumilio, which is a very powerful neurotoxic poison, which causes contraction of the muscles. In addition to other alkaloids that it secretes through the skin and serve as a defense against predators.

Its poison is among the deadliest substances known to science, and was once used by indigenous people to anoint the tip of their arrows.

Considered in danger of extinction, due to its illegal sale and the degradation of its habitat, this species is currently protected in Costa Rica by various laws and decrees, and included in Appendix II of the Convention on International Traffic in Endangered Species (CITES) . It is everyone’s job to ensure their survival.

In lives in lowland rainforests, within undisturbed and clear abandoned areas. It can also inhabit cocoa plantations. This frog is prolific on the humid Caribbean side on the pre-mountain slopes of Nicaragua and through the lowlands of Costa Rica up to 900 meters and in the northwest of Panama.

This species of frog has toxins similar to Dendrobates Pomillo (pumiliotoxins B,C) which are a very powerful neurotoxic venom that causes muscle contraction, also other alkaloids that serve as a defense against predators.  In order for Dendrobates to synthesize the poison, this species of frog needs to eat ants or animals with formic acid.

The granulated arrow frog (Oophaga granulifera) is a species of anuran amphibian that belongs to the family of poison dart frogs that is found in Central America, Costa Rica and Panama.

This frog has been reclassified as Opaca granulifera, being previously considered of the genus Dendrobates under the binomial name Dendrobates granulifera.

It is a small-sized dendrobatid anurous. It is 18-22 mm long with granulated skin. The color of its back and forelegs are bright orange.

It is a poisonous frog. Using its venom only for self-defense against predators. The bright colors are a warning to those predators trying to feed on it.

Native to Costa Rica and Panama. Its range extends from southwest Costa Rica through the adjacent area of ​​southwest Panama to heights of up to 100 m (328 ft) above sea level. It can also occur in the southeast of Costa Rica. Living in the leaf litter of the low-altitude humid forest floor.